In our monthly feature, Richard Lord applies fantasy football scoring to the performances of Town players in September

September ended much better than it began, with back-to-back league victories flanking that League Cup spanking at Chelsea. Town lost to a very decent team in Crewe, a very poor team in Salford, and scraped a draw against a very average team in Oldham. Seven games in total, seven goals scored, 13 conceded, 14 yellow cards and hopes of a play-off push retained. Decent, then.

Only McKeown, Hendrie and Hessenthaler started all seven games in September. Only Ring failed to make some sort of appearance. Unsurprisingly, with three goals in two games, Robson top-scored for Town this month. (See the August report for an explanation of the scoring system.) 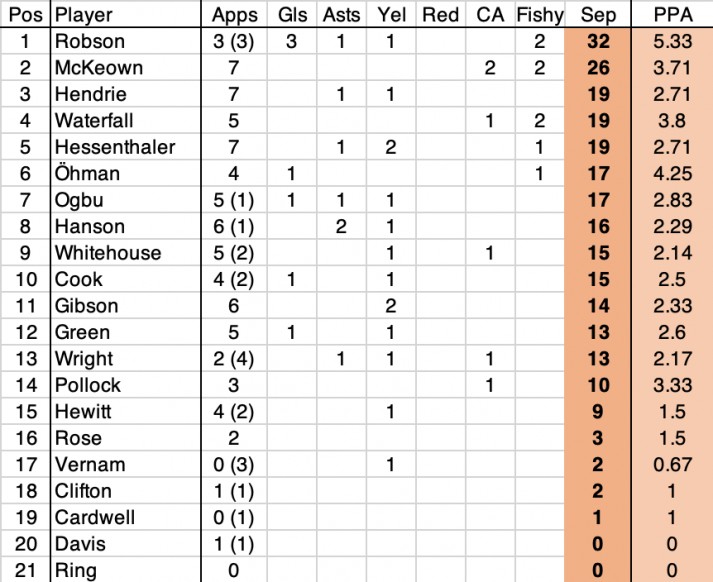 With 26 points this month, McKeown makes second place his own. Behind him, it’s much of a muchness, so we need to look at the players’ points-per-appearance (PPA) ratio to understand who’s had the most influence on games.

Three of the five players with the highest PPA ratio are centre backs. At 4.25 PPA, Öhman was in great form until injury forced him off at Salford. With a couple of man of the match awards from both Cod Almighty and The Fishy, Waterfall has been a steady influence at the back, while Pollock's 10 points from his three starts reflects his contribution to the starting XI (despite scoring -1 in the Chelsea game). Our remaining centre back, Davis, managed to achieve the grand total of no points from his two appearances this month.

However, whether you look at the total score or his points per appearance, there is no question who is the player of the month for September. With three goals, an assist and two man of the match awards from the Fishy, this month’s award goes to Sunderland’s Ethan Robson.

It was a barren September for Hanson, who failed to score but at least notched two assists. Despite only finishing ninth in the September table though, such was his lead in August that he remains top of the overall season table by 16 points. 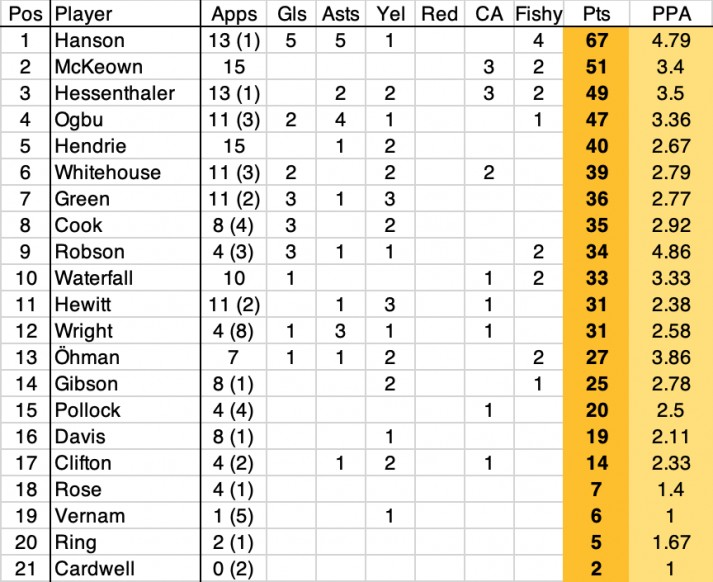 McKeown has closed the gap in September with a couple of clean sheets and a smattering of Man of the Match awards. The keeper moves up four places into second ahead of Ogbu and Hessenthaler. After an assist and clean sheet against Macclesfield — plus being an ever-present — Hendrie now forces his way into the top five at the expense of Whitehouse and Green.

Although Robson is only ninth in the table, his points-per-appearance ratio is the best, ahead of Hanson, with Öhman, McKeown and Ogbu completing the top five. An honourable mention goes to Wright who, with one goal and three assists, has 30 points from three starts and eight sub appearances. Twelfth place probably doesn’t do him justice.

Town have four more matches lined up in October. If Hanson starts finding the net again, Robson continues his scoring prowess from midfield and Wright terrifies a few more full backs then things could get a little more interesting.