The Orient struck a blow in the fight for real football last May. Offence intended to the likes of Crawley and Stevenage; if your ground is within a goal-kick of a roundabout and looks like a B&Q, we'd probably rather be in an actual B&Q. Picking your way through the bustling streets of Leyton to Brisbane Road while avoiding the impromptu Turbo White party on your shortcut through the local park and the fleet of police vans outside the ground is what it's all about. 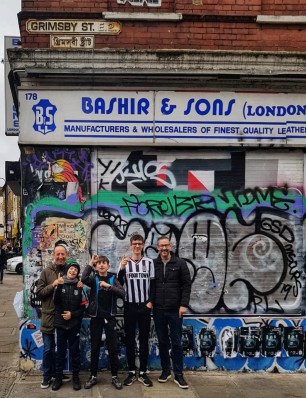 Our gang made sure we ticked off the London awayday boxes pre-match. Scott, wearing his Ollie cap, took a selfie with the Holloway tube station sign and we made a detour to Brick Lane for food and a picture with the Grimsby St sign. All we had to do was moan about the price of a London ale to complete a full house.

We made the trip with fond memories of our last visit: Dizza and Vernon's magic and a ninety minute party with the Eendracht Aalst boys as we strolled to a 3-0 win. These O's are in finer fettle than last time, however. In 2016, they were conference bound. The programme was an A3 fold-out printed by fans to fulfil League rules and the team wasn't any less makeshift. The dip in the conference was mercifully quick and despite some mixed results this season, the 4-0 tonking they handed down in Cleethorpes evidence that today would be no such stroll.

You want omens? The boys found a Brizzle Dizza shirt in Classic Football Shirts in Shoreditch before the game and the Aalst boys were booked in again. All we need is Vernam to be our Vernon and everything would be tickety-boo.

Town lined up in the patented, blueprint for 17th, 4-3-3 formation as follows: McKeown, Hendrie, Pollock, Davis, Glennon, Clifton, Hessenthaler, Whitehouse, Vernam, Rose, Wright. The substitutes were Russell, Öhman, Hewitt, Cardwell, Clarke, Buckley and Starbuck. Orient had some big units and not just at the back. Wilkinson for example had a tall frame resembling our old friend Luke Maxwell, the human double wardrobe, yet he seemed to be playing on the right wing. They have lots of ex-Mariners in their ranks but none made the starting XI. Hey, there’s Lee Angol, he'll do; he's an honorary Mariner having been linked with us for the last 87 transfer windows.

We 1,278 Town fans were housed in the gabled east stand to the side of the pitch. The Aalst boys arrived fashionably late, exposing the shortcomings of unreserved seating in a sell-out. 'We stand where we want' was the song as we sorted ourselves out. Right, they've kicked off. Let's see what Ollie can do this week.

The windy conditions and a pitch with a hidden bobble or two didn't spoil the game. Whereas the Blundell Park corners have burger vans and randomly parked Ford Transits, Brisbane Road's have apartment blocks. They should detract from the ground but don't. They enclose the stage and give the ground a poor man's Stadio Luigi Ferraris vibe. They also helped trap the good atmosphere created by the Town fans and the well-populated home stands. The players responded and gave us a really entertaining game.

Most of the first half chances came from set pieces but an early Town opening arose through good work from Whitehouse. He won the ball in the centre circle and ran with purpose at the Orient defence. The chance went when Ahkeem was unable to link up with him but it set the tone for Whitehouse who had one of his better games in a Town shirt.

Angol was proving to be an awkward customer, falling over and winning frees. He paid us back for some of these crimes by missing a couple of sitters. One of those came after about 15 minutes and Orient's best move of the half. Wilkinson picked up the ball near halfway and bazookaed crossfield to Maguire-Drew. Some neat control and a dummy undid Hendrie and he whipped a cross in that Angol scooped over from a few yards out.

What about the new guy? The first impressions from Glennon at left back were good. Conor Townsend good. He was so assured, it was hard to believe it was his senior debut. Good skill and control, eager to get forward on the overlap, he also covered his defence duties well. Not even a ball in the face and a bloodied nose could unsettle him. Dave Moore quickly patched him up and gave him an unnumbered replacement shirt. Sort it Town, get the stripes back on our shirt next season, it looks naff without. Glennon's bloody shirt wasn't the only departure as both defences had early re-jigs for crockings. Turley went off for them and Öhman replaced Davis for us. 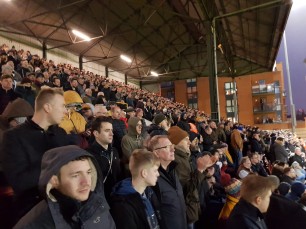 Orient had more possession but apart from that Angol miss, the threat from both sides was largely limited to set pieces. The O's had more of these and one required a goal-line block from Wright. They liked falling over on contact and the standard rubbish division four ref fell for the falling. We need to get smarter or find better refs. So we will have to get smarter. 40 yards out with his back to goal, the opponent wants you to bump into him: DON'T.

Our best move of the half came just before half time. Good passing and movement by three or four players worked the ball to Hendrie whose shot from a tight angle was kept out by the keeper's legs.

Right, half time. The East Stand may have charm but like our Main Stand it also has its shortcomings. The bogs were shoddy and almost inaccessible through the cramped concourse. Worse news was the hopelessly inadequate tea and tuck shop meant no half time tea to warm us up. Bizarrely a pizza delivery moped made its way around the perimeter during the break. Sadly, attempts to flag it down and steal its bounty failed.

Griping over, the game resumed in a similar pattern. The Orient set-piece delivery was getting better (insert your own pizza delivery pun here). This was not good for the heart, McKeown made a couple of catches but was unwilling or unable to command the area. Balls from Brophy's left boot were fizzed in right under the bar and barely kept out.

Yes, Brophy. He had a pivotal role to play in the game and gave our right side a torrid time. Hendrie is a solid right back but was made to look Dixonic at times by the Orient number 16. One such exchange led to a superb cross to Wilkinson's bonce at the far post. McKeown's Top Trumps card might be lacking in the crosses category but it makes up for it in shot-stopping and he stuck out a leg to make a terrific save from the downward header.

Glennon showed his attacking skill to create a great chance for Whitehouse to scuff wide and Vernam continued his improved form by buzzing about and creating some nearly moments. One of these led to another opening for Whitehouse who made much better contact but once again missed the target. In an attempt to upgrade these nearly moments to actual moments, new signing Clarke was brought on for Rose.

Ironically, it was an error by the dangerman Brophy that lead to our goal. He set off on a crossfield run for some reason and was pick-pocketed by Whitehouse. Quick as a flash, our man spun and clipped a perfect through ball for Clarke to run on to. The striker had been on the pitch for about ten minutes and perhaps touched the ball once or twice in that time. No bother. Clarke steadied himself and hit a first-time lob over the advancing Sargeant. But was the looping lob on target? From the the side stand it was difficult to tell. 1,278 fans assembled on the launch pad as the ball bounced and collectively blasted off into orbit as it bulged the net.

Orient had the balance of play but you always sensed we had a goal in us. We almost added another shortly after while the home team were still feeling sorry for themselves. Vernam vernamated about and cracked a low, angled shot that Sargeant could only parry. The ball spun free in the six yard area, hopped up on a dinner plate, garnished itself with a sprig of parsley and said tuck in. On another day, Amond, Hearn, North or Mendonca was already reeling away in celebration. Not today and it would cost us. We need a new fox in the box. The guy who wins you games that are otherwise drawn or lost.

Nevertheless, the goal turned the volume up another few notches on the constant Town singing. Can we do this? The match had been whizzing past but not any more. The minute hand which had previously orbited like an, err... well oiled clock, seized up like my gammy hip. Crosses rained in and they continued to torment our right side. Wright made way for Hewitt in an attempt to stem the flow but it just seemed to draw them onto us more. Their fans knew it and got louder as well, spurred by McKeown's ridiculous time wasting. He's a strong contender for a Golden Raspberry for his acting up and, as last week at Mansfield, picked up a yellow card for his efforts. In one hilarious instance he disappeared from view for what seemed like fifteen or twenty seconds as he descended some steps into the stands behind the goal to retrieve the ball.

All this faffing about led to five minutes of added time. In the first of these our fears were realised. Like last week, bodies were put on the line in a scamble in our area. The ball fell free to second-half sub Craig Clay. As three or four more Town bodies prepared to block him, Clarke rather needlessly bundled him over from behind. No way was this ref going to miss this opportunity. Penalty to Orient. Angol stepped up and planted an unstoppable shot into the roof of the net. Disaster.

The last few minutes were quite hectic as both sides tried to win it. The only real drama was right at the death. Whitehouse played Clarke in on the right. As he pushed the ball past the last defender he was hauled down on the edge of the area. Straight red all day surely? No, the ref confirmed his plonker status by only giving a yellow. Clarke belted the resulting free-kick into the wall and that was it. Spoils shared.

The players came over for some mutual apreciation followed by a solo visit from Ollie. It is tempting to say he millked the applause and love to the point where the cow died of dehydration. This was quickly forgiven on hearing his post match interview. The guy is bonkers in the best possible sense. If being a Town fan has taught us anything, it should be to take any opportunity to enjoy yourself as it might not last.

As we left, the Belgian lads were starting up Wonderwall outside the ground. The police came prepared for anything but not for that. After some confused exchanges, the band were allowed to play on. Just another week in the crazy world of GTFC. 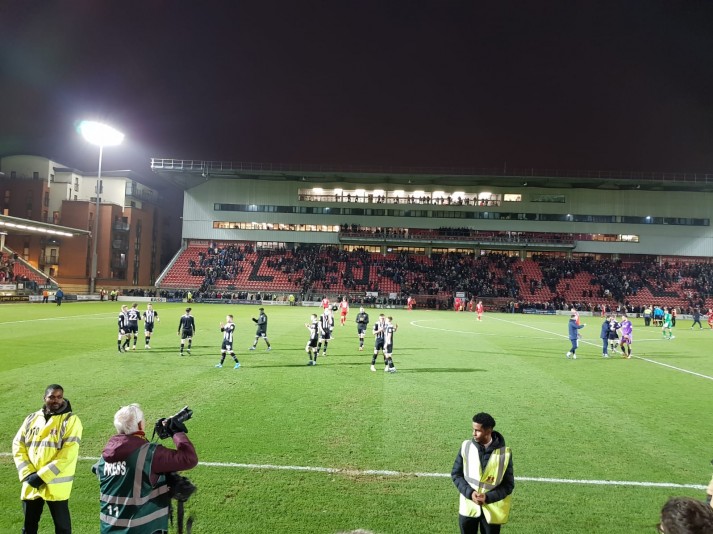