Paul continues his history of the Grimsby strip, starting this week in 1984-85 and Hobott's second season. 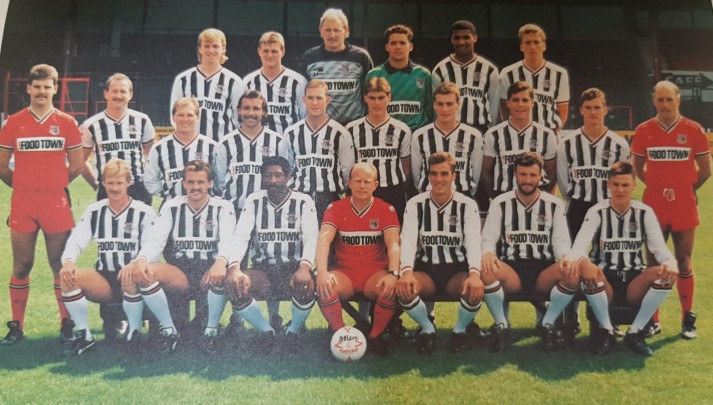 Having finished the 1983-84 season in 5th position in Division Two, Town were an established outfit at that level, the team awash with local talent and a renowned swashbuckling style. There were subtle changes to the home top that year, Hobott's second.

The stripes changed, so that the black one was in the centre. This meant the logo was now white and the sewn-on badge used white stitching. This, in effect, gave Town two tops as the previous years was worn alongside the new variant. 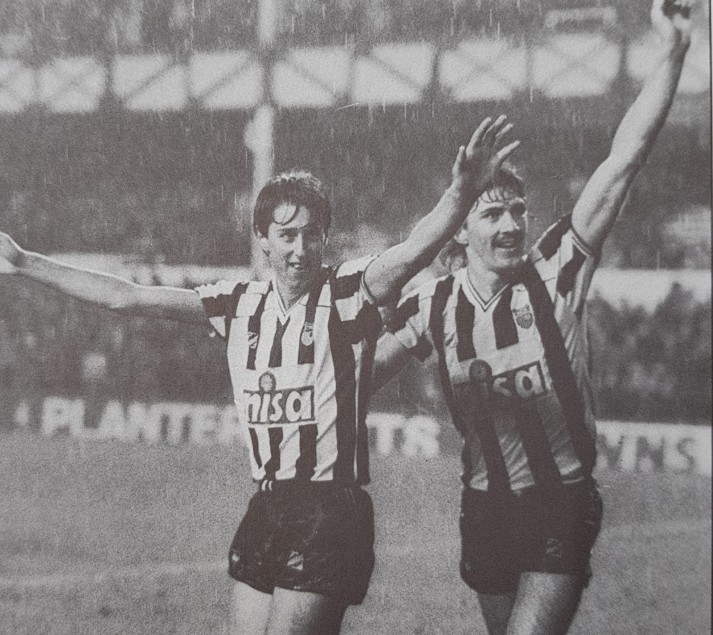 Another change was that of sponsor, with NISA (pronounced 'nicer'), a consortium of small shops co-founded by Town director, and future chairman, Dudley Ramsden. NISA stood for Northern Independent Supermarkets Association, and it was this logo that emblazoned the shirt of Paul Wilkinson as he headed home against Everton that season. The logo had two sizes, with the smaller of the two used for TV games to comply with TV advertising regulations of the time.

The next season saw a few changes, with Mike Lyons replacing Dave Booth and a new variant of the Hobott home shirt being worn. The V-neck was now thicker, and the two perpendicular stripes had now been coloured-in', with a solid white block.

The NISA logo was smaller, like the one worn on TV, and the shorts different too; the stripes on the side being replaced with a white V where the short opened on the thigh. The socks remained the same. 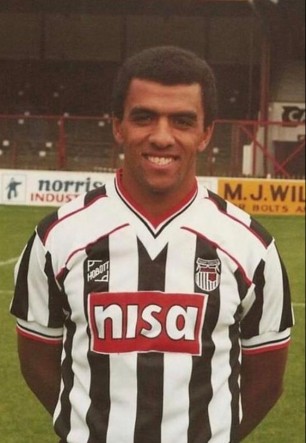 Curiously, Town wore the previous season's home shirt in an FA Cup game against Arsenal in January 1986. Worn with the new shorts, goalscorer Gary Lund wore the black stripe in the middle version, Dean Crombie the previous years iteration.
Town’s best kit? Probably, but startling that there were many different combinations and variants. But not as many as the next kit.

EN-S were a Liverpool-based sportswear brand whose logo was a capital E with a line above it. 1986-87 saw their first Town kit, a sponsor-less and smart effort. The collar was a white rounded effort, crossing over a the tip with two red lines within it. The stripes were thicker than the Hobott ones, with the ones on the sleeves not having any tapering.

The 'E' logo was red with a white line above it and the Town badge much bigger than previously. Smart shorts had a red and white trim along the hem, a small EN-S logo within a square and, crucially, no Town badge. Instead there were small numbers on the right side, before numbers on shirts became a thing, which as the season motored to relegation, became bigger, taking up nearly a third of the shorts. The socks were black with three white stripes on a red turnover, the sort you would get cheap from the Sunday Market.

As that dreadful season progressed Town managed to net a sponsor in local fish producer Bluecrest, their first logo red on a white background being quickly replaced with white lettering on a black background, although this also had a gradient look in future months.

After relegation from the second tier, Town sacked Lyons and appointed Bobby Roberts. His first Town kit was almost the same as the previous season, except the badge and logo changed places, with the badge now on the right breast. The E on the left was now white with a red line above it and the shorts now had two white stripes over the right corner with the number, if I remember correctly, now being on the left buttock. The socks were now black with red stripes on the white turnover, the sort you could get from Freemo Market. 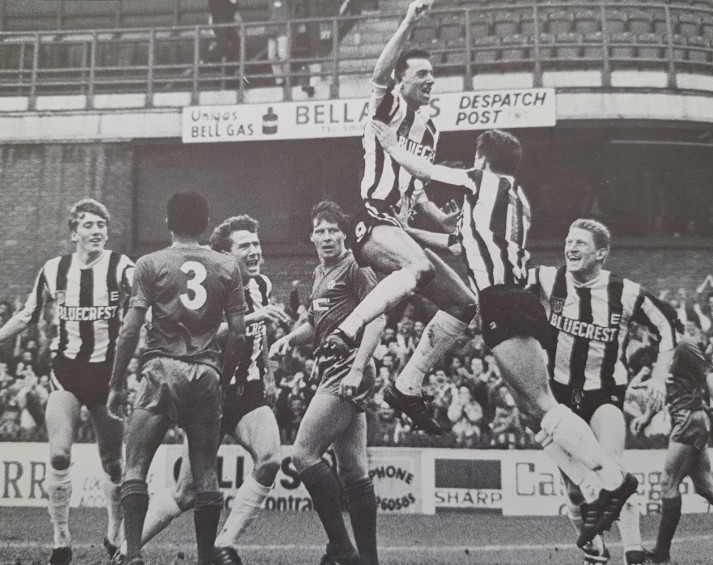 You didn't see many Town fans wearing this kit and not just because the team was shit. EN-S obviously had a few issues, as when my brother won a competition to win a Town kit and tracksuit in 1987, the kit was plain, no sponsor, logo or badge, What he did get was a sew on Town badge, on a rectangular black background, like the sort of thing you got when you completed your BAGA award or a swimming distance.

That season I was a mascot and you were provided with a kit to wear just for the occasion. There was no EN-S kit, so I wore a 1986 Hobott top and 1984-85 home shorts as I led the team out to barely two thousand fans on a Tuesday night in February 1988.

As Town suffered a successive relegation, the appointment of one Alan Buckley heralded a new dawn and a new kit, We were one of fifteen teams that year to be supplied by Scoreline, more than Umbro (fourteen) and Adidas (seven). Kits all seemed to have the same V necked cross over collar and the Scoreline logo on the arms and Town's was no differnt.

Their collar, classy with a black-red-black line and the white backing was accentuated with white shoulder panels and red piping, a nod maybe to the Hobott 1985-86 kit. The sleeves were white with black Scoreline arrow logos on each one.

Town were now sponsored by "Europe's Food Town" which was actually a conglomerate of different food-processing businesses who each put in a bit of money. With the small, handwriting-esque "Europe’s" ascending next to block Impact lettering of "Food Town" it was a sponsor that, while not actually sponsoring anything in particular, looked great on the shirt.

The black shorts had a thick white band on each side, with red piping and black Scorelines on each one, and an italicised GTFC on the bottom right in white.

Socks returned to white, with two thick red stripes on the turnover. As Buckley got to grips with the club, this kit went on a cup run to Plough Lane via Ayresome Park and then oversaw a promotion push the next season before bowing out and being replaced mid-season in 1990. 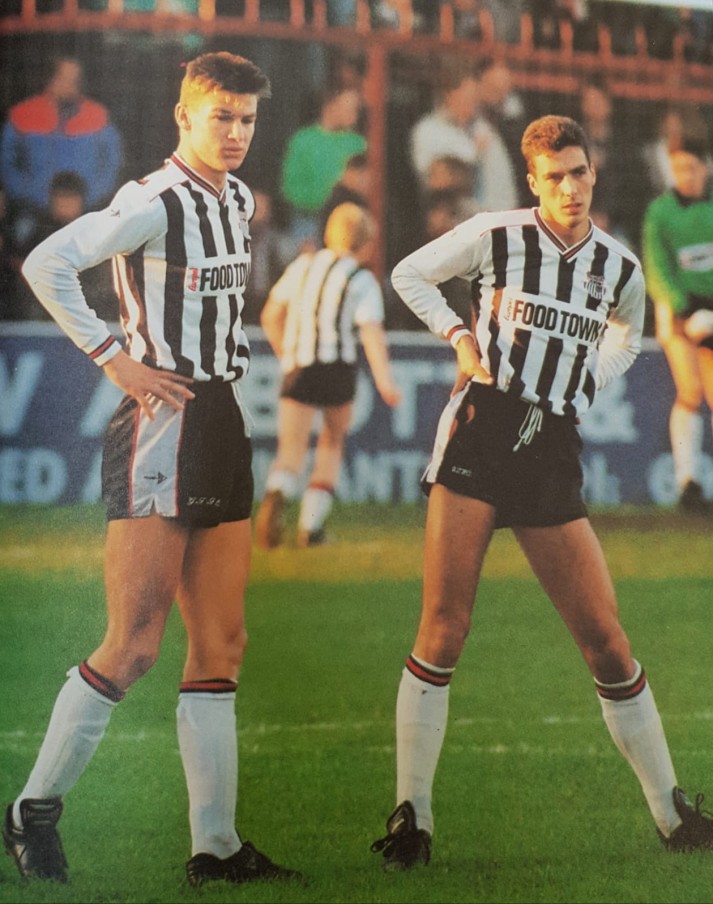