Erratic, tetchy but somehow enjoyable: a first away game

Leeds was the home of John Charles, the gentle giant. But there was nothing gentle about the game Neville saw there in 1951 for his first away game 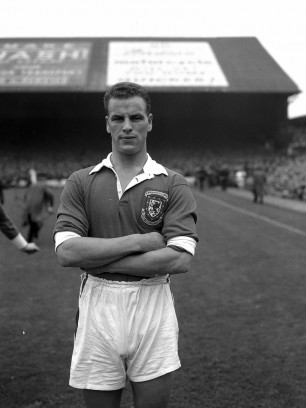 Remembering my first away match takes us back to a time of erratic team selection, and erratic behaviour. The trip, to watch Grimsby at Leeds United on 14 April 1951, was arranged as a subtle extra to a short North Yorkshire holiday.

We managed the journey to Leeds from Harrogate on a match-day excursion with, it must be said, subdued United supporters. Leeds were always going to be a handful of points away from promotion, while Town's hopes of avoiding relegation had suffered a severe blow the week before when we lost a four pointer 2-0 against fellow strugglers Luton Town. There were only 15,500 spectators at Elland Road that afternoon, and the pitch was bereft of grass. It was then that we realised how lucky we were with our lawn at Blundell Park.

The footballing legend John Charles had impressed in the Leeds defence when the two two sides had drawn 2-2 draw at Blundell Park. At Elland Road he would steal the headlines as he led the attack superbly, scoring the only goal of the game in the seventh minute.

Stan Hayhurst was in goal for Town. Ahead of him, we introduced a young full back with the name of Harold Greetham, who had played well at Midland League standard in the reserves. He replaced the Town stalwart right back Ken Moody who may have been injured but was by then playing poorly. I was never sure about Harold’s defensive qualities but he did hit a great long hoof down the middle. I learnt later he was known as Tank - presumably because he went through everything when making a tackle - and on one occasion as Woofer: I take that to mean he woofed his clearances over a long distance.

Alongside Greetham, we had Don Harnby at left back: usually an average full back who played a solid role in a shocking side, he was lucky not to be sent off at Elland Road. The match was a tetchy, petulant affair. Leeds were on the extreme edge of the promotion race and we did not win any friends, especially when Don tried to tackle/take out, their outside right, Pete Harrison, who had weaved his way down the right. Don timed his run to perfection: he slid in by the corner flag, left foot leading. He took Harrison out of the game and left him injured. The end was nigh for our Don: he left early the following season when Bill Shankly noted his penchant for giving away free kicks and penalties with mistimed sliding tackles.

In midfield we had Reg Scotson, a hard-running and hard-tackling wing half who was well liked by Shankly, as was our centre half Duncan McMillan. He was an intelligent, dedicated defender who carried, to use the words of one of my colleagues, a stone too much timber. There was another debutant at left half: keen local cricketer Arnie Walker, full of promise and enthusiasm, after looking a potential first teamer in the Reserve side.

To make room for Walker, our usual left half "Gentleman" Laurie McKenzie played inside right, replacing the expensive but ineffective signing from Plymouth, Frank Squires. His main footballing attribute, from left half, was his ability to pass the ball accurately to left winger wee Georgie Hair and later to Jimmy Maddison. He also took a mean penalty: he had notched two when the sides met at Blundell Park, one almost certainly given away by John Charles.

Perhaps some ill-feeling was carried forward to Elland Road. There was a second half altercation with Ernie Stevenson and Laurie gave Ernie a boxing lesson. McKenzie raised his arms again, took guard and led with a series of straight lefts, Ernie retreating

McKenzie ran with his arms higher than any footballer I have seen - there's a picture of him training in Don Wherry’s magic bible, the History of Grimsby Town, which illustrates the point. The positioning of his arms proved all important that day at Leeds.

Perhaps some ill-feeling from that encounter was carried forward to Elland Road, for what had begun as an average game was reduced to a scrappy one and tempers flared. There was a second half altercation with Ernie Stevenson and without doubt Laurie gave Ernie a boxing lesson. McKenzie raised his arms again, took guard and led with a series of straight lefts, Ernie retreating. The ref decided he had seen enough and Laurie was sent off. It was a strange, erratic moment as I cannot recall Laurie ever being involved in disciplinary problems.

One down, as ever that season Grimsby huffed and puffed but, without Billy Cairns, never looked like scoring despite creating several half-chances. We were in a run during which we scored just one goal in five matches.

The tricky Irishman Jimmy McStay was brought in for his right wing wizardry and his pin point corner kicks - hopefully benefitting from an early night. Jimmy Bloomer was at centre forward, the replacement for Tommy Briggs. Jimmy scored 10 goals from 24 games that season, but seven had come in his first home games at centre forward, when Briggs was injured and before he had left Blundell Park. Shankly and Bloomer both saw Jim’s future as an inside right. It was bizarre the way players were selected out of position. Stan Lloyd played at inside left but was a right winger, his correct position, in Division Three North, with Jimmy Maddison at outside left.

What else is there to remember about this game? The failure to award a penalty or free kick after a Town player took a count of eight for an altercation on the edge of the penalty box. On the other hand we were lucky to finish even with 10 players after Harnby's antics: Peter Harrison was able to return from his injury just before the full time whistle blew.

By then, John Charles was dictating the tempo of the game and twice came close to increasing the Leeds lead, foiled each time by Hayhurst. I had enjoyed the Elland Road experience. But although we Mariners had our chances, I never felt after that early Leeds goal that the Mariners would recover in what, in truth, had been a sour, nondescript encounter.

The picture of John Charles is by Geoff Charles - This image is available from the National Library of Wales You can view this image in its original context on the NLW Catalogue. CC0