Out of the blue

Lee remembers how football helped him through the ordeal that had been Bursar Street school. 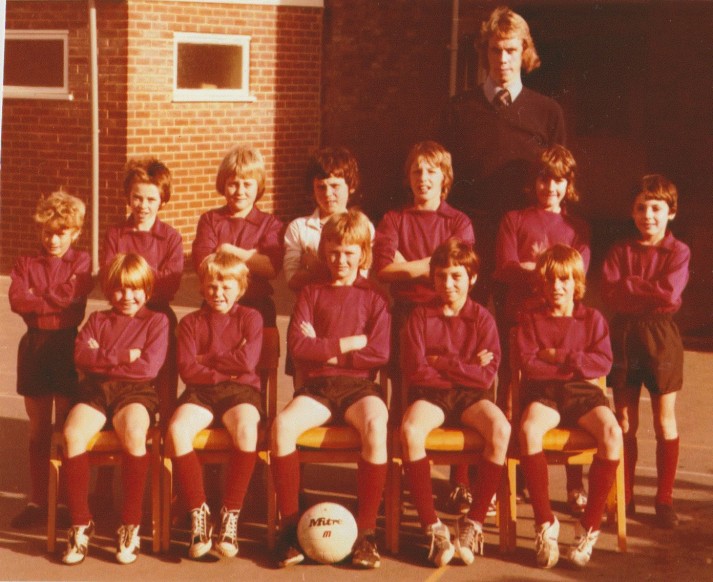 Bursar St under-11s. Lee is back row, far right. Second from left in the front row is Les Thompson, who went on to join Town juniors and played for Hull City, Maidstone and Burnley

September 1977. Reynolds Street School playing fields, Cleethorpes. It's early on in my first ever competitive football match for Bursar Street under-11's against our Reynolds Street contemporaries. The ball is silhouetted against a clear blue, late summer's sky. It's dropping vertically onto my head and I'm almost standing on our opponents' goal-line.

Reynolds Street was a local derby. Perhaps not as local as St Peter's but near enough. In those days Barcroft Street seemed miles away to me and Signhills School might as well have been on a different planet. My parents didn't drive, so my world-view was extremely narrow. School, Sussex Rec, Sedgwick's sweet shop (personal favourites: flying saucers, chocolate mice and candied shrimps) - and that was about it.

Football was my passion. For the last three years I'd spent my time either watching it on TV, playing it on the rec, reading about it in comics, or chewing gum that I didn't really like to collect cards with football player's faces on. Then Panini became a thing and from that time I spent all of my available income collecting stickers which also had footballer's faces on, but didn't require you to purchase any gum. I had yet to see a live game though as my dad supported Everton and viewed Grimsby Town with something approaching contempt. Fortunately, that would come back to bite him twice over the next few years.

Trying out for the school football team had been a really big thing for me. I can't imagine how I would have reacted had I not been selected from the 20 or so boys in my year who wanted to play. Fortunately, lanky Mr Williams the sports master selected me in a starting position for our upcoming fixture. Mr Williams was (still is, I hope) about six feet five inches tall: quite an intimidating sight for someone perhaps not much more than half that size. He was someone whose opinion counted and whose words were to be obeyed.

We lucky twelve were allocated red socks, black shorts and a red shirt, upon which we were required to ask our mums to sew on our numbers. Mine was the number 8. Our playground lunch and break time football games acquired an even keener edge than usual. Looking back, it was extremely fortuitous that our playground pitch had at one end a roughly goal shaped brickwork abutment jutting out from the school buildings, and at the other a similarly shaped wooden structure screening off the outside toilets. It was almost as if someone had planned it this way. Perhaps they had?

Football had given me something about school to look forward to rather than be fearful of. There was a definite cachet that came with being selected for a school team. Our schoolmates took a keen interest, and that in turn evoked a sense of pride

Until this point, school had been a bit of a trial for me. My very first day was marked by an incident that highlighted my anxiety. Despite living just a five-minute walk away, the prospect of leaving early if I joined the children who were going home by bus was too much to resist. When I failed to arrive home on time a panic had ensued, only brought to an end when news of my epic bus journey was relayed to my parents via the bus company and school.

Quite suddenly football had given me something about school to look forward to rather than be fearful of. There was also a definite cachet that came with being selected for a school team. We were talked about and encouraged during school assemblies. Our schoolmates took a keen interest, and that in turn evoked a sense of pride. We were even allowed to leave class a little earlier to travel to matches. My days of feeling the need to join the bus queue were over.

So, when a ball dropped out of the sky and onto my head directly under the crossbar on Reynolds Street playing field in September 1977 the feeling that I experienced in nodding it over the goal-line has stayed with me. Some things are just meant to be.

Later that same month, I watched my first Grimsby Town game under the floodlights against Hartlepool United. The following March I saw Mr Williams in flared jeans, eating a hot dog on the terraces at the Old Show Ground. Things were changing, my world seemed less daunting, and was beginning to open up. I had football to thank for that.

Was school football a terror or a liberation for you? Share your memories