Dorothy Edwards: a life behind the scenes at Blundell Park

In 1971 the club made history by appointing Dorothy Edwards, the first female Club Secretary in the Football League. We were delighted to make contact recently with Avril Taylor, Dorothy's daughter. Here Avril shares some wonderful memories of her mother and their time together at Blundell Park. 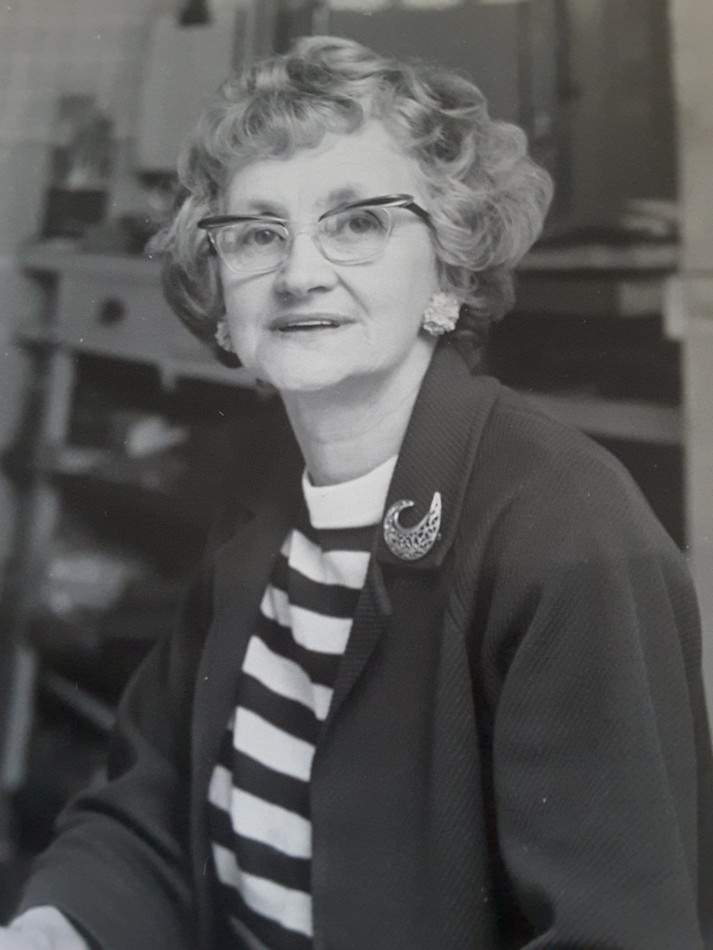 I'm only too pleased to tell you about my mother, Dorothy Edwards, and the quarter century she spent at Grimsby Town. From voluntary roles, she proved her worth each step of the way until the club asked the Football Association for permission to appoint a woman as club secretary. Remembering brings back fond memories, from Bill Shankly to Lawrie McMenemy and beyond.

Mom started her connection with Town by volunteering to work in the supporters club office in 1952, which at that time was in a shop on the corner of Harrington Street and Blundell Avenue. She was approached by one of the old Town directors, Mr Sydney Smith, who asked if she would be interested in working in the club offices for a few hours each week as well. She agreed, but again this was on a voluntary basis as I was only two then so she had commitments.

She worked with the then Club Secretary, Byron Robinson. After a year or so he realised her worth to the club and asked if she would consider joining him on a permanent basis as his assistant. For some strange reason she was never given the title of Assistant Secretary. Instead she was called Assistant To The Secretary.

Long after he had left, the sign Bill Shankly had made stayed above his office door. It read "Knock and Wait." I can just imagine him saying that

The manager when Mom started was Bill Shankly. Long after he had left, the sign he had made stayed above his old office door. It read "Knock and Wait." I can just imagine him saying that. My Dad for many years was manager of the Plaza Cinema at Riby Square. Shanks loved films and Dad used to give him free tickets. Shanks sent a lovely letter to Dad years later thanking him for his kindness. I wish I knew where that letter went to. It would have been a lovely souvenir to keep.

I joined the club myself in 1966, straight from school at the invitation of Byron Robinson. I remember Mom wasn't too happy as he hadn't asked her beforehand. Anyway she agreed, we enjoyed working together, and that was the start of my wonderful 11-year connection.

Mom and Byron Robinson had worked together for many years until his retirement. Then the Board unanimously agreed to approach approach her about becoming Club Secretary. No club had appointed a woman to such a position before. The Football League agreed right from the start but the FA was a bit stuffy in those days. However, FA Would, Town's chairman at the time, was on the FA Executive Committee and he persuaded them to give their approval.

Lawrie McMenemy was an amazing manager but not an easy man to work with. He and Mom had one particularly bad argument when later in the day she received a beautiful bouquet of flowers with a card saying "Football's a funny game. Sorry. Lawrie"

I've seen with great pleasure the wonderful pictures shared recently on Twitter of Town's fourth division championship win. To be reminded of that season is amazing. It was very busy and I can remember we worked lots of hours but worth every one. I am so proud to have been part of it, even in a small way. It started well and finished brilliantly.

Lawrie Mac was an amazing manager but not an easy man to work with. He and Mom had several arguments and I remember one particularly bad one when later in the day she received a beautiful bouquet of flowers with a card saying "Football's a funny game. Sorry. Lawrie". He was a true friend to both of us.

It was very sad to hear about Jack Charlton as I was preparing these notes. My friend and I went to babysit Lawrie's kids one evening and were lucky enough to meet him there. He and his wife had come down for the weekend. He was a lovely man and a true legend.

Although I never worked with him I do remember another manager, Tim Ward, quite well. He was another lovely man, very quiet and a true gentleman. I remember Mom saying he was too nice for football. He and his wife were good friends of Mom's and I remember he retired to live in Robin Hoods Bay, North Yorkshire.

In the 1950s and 60s Town would throw a Christmas party each year for all the players' kids. Mom did the vast majority of the catering and I can remember on one occasion we put together a cardboard funfair set of table decorations that looked amazing. It was worth it just to see the faces of the children when they saw it even though it did take hours and hours to do.

In another event representative of its time, I was remembering back when Dougie Collins signed for Burnley for a record, at that time, of £80,000. The then Burnley Chairman Bob Lord owned a string of Lancashire butchers shops and came over to Blundell Park personally to do the deal. He brought packs of steaks with him for the Town staff, one of which we were lucky enough to enjoy. Food was another part of the club secretary role and Mom was responsible for all the matchday catering for the Directors and visiting Directors. The amount of food that went through our house was amazing, but we never had a mouthful! Mom's cooking received many compliments from both home and away Directors.

We left the club when my Dad was diagnosed with cancer and we all moved down south to join up with the rest of our family. If I remember rightly a man called George Siddens became Secretary. Sadly Dad died within 14 months. By then, the club chairman was Paddy Hamilton, and he contacted Mom and persuaded her to come back to Cleethorpes, which we did. I think she was happier to be back in familiar territory. We worked on for another 18 months but she was finding it more tiring so we decided to call it a day and go back down South.

Mom had been born in Grantham in 1913 and she died in Ruskington, in Lincolnshire in February 1997. She'd found Grimsby Town a great place to work and even when she left it was still important to Mom. The older former Town players such as Dave Boylen will remember her well. She gained respect from everyone who met her and rightly so.