Champions!, Rob McIlveen's book on 1979-80 takes you back in time to a season you long to relive 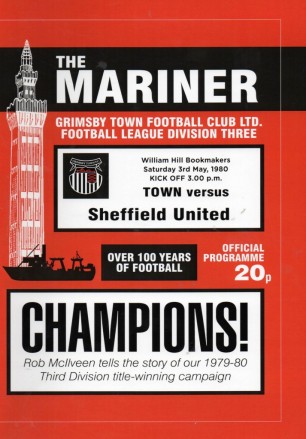 What a delight is Champions! Rob McIlveen's detailed review and memento of the 1979–80 third division championship-winning campaign.

The book contains a report of every league and cup game that season, together with listing all of the other results in the division and a weekly snapshot of the league table. Reading the book in game sequence is like being transported back in time 40 years. Each match report features contemporary comments from those involved: mainly from George Kerr but the reflections of opposition managers are also well represented. The book tells us what people were thinking at the time so that you are sharing the journey, the highs and the lows as the team, after a fairly shaky start, start to move up the league table.

It is tempting to imagine that we were champions-elect from the get go. Nothing could be further from the truth. By the middle of October and more than a quarter of the season gone, we had sunk down to just a point above the relegation places. But the league table was not at the forefront of anyone’s mind because of the extraordinary cup exploits underway: disposing of local rivals Scunthorpe; handing Division Four promotion-chasing Huddersfield a football masterclass; knocking out Division Two Notts County; and then one of the most memorable games in the club's history, at home to Everton in front of a crowd of more than 22,000. Finally the epic encounter with Wolves and, three weeks later, Anfield and another incredible occasion.

The book tells us what people were thinking at the time so that you are sharing the journey, the highs and the lows as the team start to move up the league table

By the time our interest in the cups had ended, there had been an incredible turnaround in our league form. On 26 January Town hit the top of the table for the first time and when we lost at Colchester on 8 February, it was our last defeat of the season. A 15-game unbeaten run took us to the championship.

The achievement is even more remarkable when you consider that manager George Kerr had a first-team squad of just 16 key players. Almost all of them had been members of the side which gained promotion the previous season, the principal exceptions being Kevin Kilmore and John Stone. Over the course of the season the squad was pushed to its limits by suspensions and injuries. But the squad contained a number of very versatile players enabling the manager to shuffle the pack. The legendary Bob Cumming finished the season as leading scorer. And yet a number of his appearances were at full back. John Stone, primarily a full-back, also played in midfield when required. Both Kevin Moore and Dean Crombie took turns at full-back and central defender. At times we could barely field 12 fit players. Reading how an injured player would miraculously recover in time to start the following game only to be forced to leave the field early, it’s clear that key players were occasionally far from fully fit.

Up front, the striking positions were filled by Drinkell, Kilmore and Liddell depending on who was fit at the time, with Tony Ford another who displayed his versatility. Ford, together with the Moore brothers and Kevin Drinkell were local lads and their importance to the success of the team cannot be overestimated. Their regular presence in the starting line-up meant that the team truly represented Grimsby in a way which few, if any, Town sides have, before or since.

Crucial to the success or the team was the midfield engine room, and the sublime Joe Waters, still my favourite-ever Town player. But the contribution of his midfield partner Bobby Mitchell is often overlooked. The best passer of the ball in the squad, he was integral to the team. Like Waters he was present through all 59 league and cup matches that season. It’s a shame that he has not been accorded the same legendary status as some of his team mates.

I was already a Grimsby exile during this memorable season but managed a fair number of matches. Reading Champions! brings the memories of goals and key incidents - like Cumming’s set-to with Norman Hunter - vividly back to life. I really did feel that I was reliving the season.

Tony Ford, together with the Moore brothers and Kevin Drinkell were local lads. Their regular presence in the starting line-up meant that the team truly represented Grimsby

To be critical for a moment, there are some factual errors in the text: Waters scoring against Sheffield United on 15 December "despite Kinsella’s best attempt at clearing it" when Kinsella is not listed on the team-sheet; Cumming reported as scoring the third goal on 26 January although Kilmore is listed as the goalscorer. Although I understand the whole book has been done as a personal project, I can't help feeling that things like these should have been picked up. Most glaring of all is the omission of Kevin Drinkell from the team sheet for the final match of the season, which appears on the back cover of the book. Maybe it was omitted from the original programme of which it is a reproduction, but surely the guy deserves to be listed now? After all he made a pretty significant contribution to the match seeing as he scored a hat trick.

But these minor observations aside, the fact is that the book is a joy. The 1980 team is definitely the best I have seen in my half a century of supporting the club. The core of the squad would go on to be genuine promotion contenders in the second division and, had the play-off system been around when we finished fifth, might well have made it to the top division. We will never know. But it doesn’t change the fact that the football they produced at times was quite simply magical.

They were true champions and this book is a fitting tribute to them.

Champions! is an A4-size hardback (approximately 240 pages). It is available from the Mariners Trust for £12.50 plus postage and packing