With Town about to unveil their 13th Errea shirt, the previous manufacturer was one we had all heard of. Paul completes his history of Grimsby kits

Following the two year of monstrosities that were the orange trim kit and the awful "GT Sports" effort, Town unveiled a new kit with a familiar logo: the Nike swoosh/tick.

Suddenly, they had been catapulted from Sunday market strips to sharing designs with your Arsenals and Manchester Uniteds. Except it wasn't the case. All Town had done was sign a sub-licenseing agreement, similar to that of Southend and Just Sport. Essentially, the kits are the same you can get from a teamwear catalogue, stitch a badge onto, and iron on a sponsor's logo: From Sunday market to Sunday league.

The first Nike/Town collaboration saw a smart v-necked effort, with a curious black base to the back, and a mesh finish which presumably meant you could sweat out your 15 pints from the Saturday night. 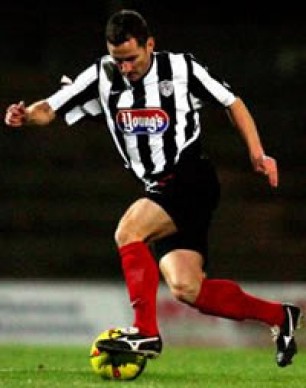 The badge, was the same one stitched onto the previous four shirts – they must have had shedloads. The new sponsor was the national brand and local fishery, Young's. Their first appearance at the back end of the Jarvis debacle cemented a partnership that is outlasted only by Flybe and Exeter. Given the airline's current plight, we could soon have the longest serving sponsor in the country.

Nike's next effort was what looked like a half and half shirt but was actually four really wide stripes, two black and two white. The big design mistake was making the sleeves the same colour as the stripes nearest to them. The shorts - plain black for two years – now had a white stripe down the side and the socks were white with a black patterned back and the tick. 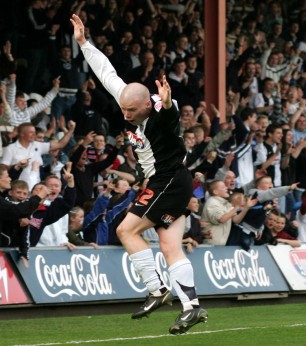 The third and final Town kit was the neatest of the three. Taken from the teamwear catalogue of 2007 the 'Division' top had better stripes and a thicker v-necked collar although the stripes were off centre. Shorts were the same with black socks finishing it off.

The kits of the Nike era were OK, but ultimately they were kits for a Sunday league team. Every kit we have had since has been bespoke.

Town's next designers were Errea, and they have been with us ever since: only Cheltenham have had a longer run with one manufacturer, also Errea. The Italian designers were known for their work with Middlesbrough in the late-1990s, and were always happy to experiment with kits. Their 12 kits so far have all been a different interpretation on stripes, and have all looked different, which is no mean feat.

The first kit saw black shoulders, red flashes and for the first – and only – time, the Town badge in the middle of the shirt. Shorts were black with flamboyant trim, and socks white, as they were the next season, with black piping and a cool GTFC on the shin.

The next season's kit was part of a fan's vote. The shirt that wasn't chosen had a black swirl engulfing the bottom half. The chosen kit had a collar and white shoulder panels, not unlike the Scoreline effort. The back was mainly white with a red GTFC on the back of the collar.

The kit that was worn with much fanfare at Cheltenham on the opening day of 2009-10 will forever be remembered for a winless 26 matches and Fuckingbarryconlon. Part of the lamentable squad was Tommy Wright and it was he that demonstrated the two 2010-11 design candidates that were proffered to fans in the middle of that winless run. 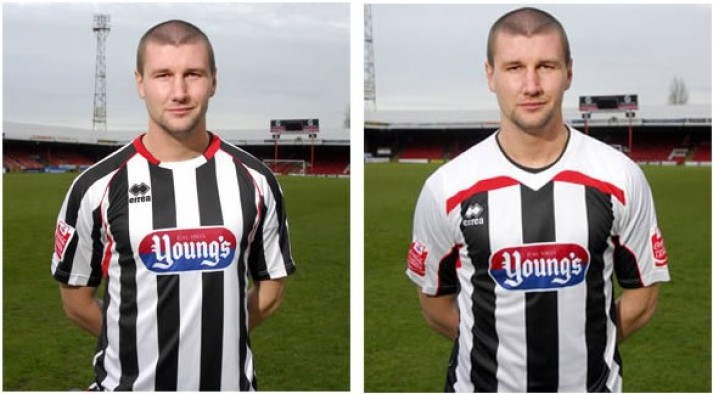 The winning design was more obvious here due to design two looking like a bad Umbro copy and the broad stripes did a sterling job of finishing mid-table in the Conference. Since then we've had less stripey backs – last one 2013/14 – gradient finishes, a move to red socks and now black, all with a nicely original tint (although a job lot of 2017 kits were rebadged for Spennymoor.) The best Errea kits are the Bogle Wembley number, the Minimalist John Lewis kit of 2014-15 and my favourite, the baseball collared shirt from 2018-19.

I know people doubt the quality but I would rather have a unique shirt than a teamwear effort any day of the week.