On Tuesday 26 August 1958, Grimsby played Lincoln City. The match programme provides a fascinating glimpse into the past of the club, the town and the times.

The match day programme from our local derby against Lincoln in 1958 is a fabulous time capsule, a real piece of social history.

It was our first home game of the season, so "The Mariner" contains the league table from the previous season, when we finished in a comfortable mid-table position in the second division, the second tier of English football. 11 of the 22 teams who had been in Division Two in 1957-58 are in the second tier again today. Naturally, those clubs have had their ups and downs, but it suggests a certain consistency through the myriad social, economic and demographic changes in the 60 years since. Three are now in the top flight.

For the 1958-59 season we were joined by another local rival, Scunthorpe United who had won the Division Three (North) title the previous year. This meant that all three Lincolnshire teams were in the second tier at the same time, something which had never happened before, and hasn’t happened since.

In the programme itself, the chairman’s message reflects on the success of the TV coverage of the previous summer’s World Cup and mentions that the trophy was presented to the winners by none other than our own Club President Mr A Drewry, who was then chairman of the English FA. Our Vice-Chairman was a certain Mr Osmond - one can imagine he had some connection to the stand which bears his name, which had been built in 1939.

The programme is full of advertisements for local businesses. Granville Tours, the Winter Gardens, Norris the Rubber Man, the Nottingham Hotel, Bellamy Bros and Hewitt’s Beers will be familiar in varying degrees to many current day Grimbarians. There is a quarter page ad for Dobsons Fisherman’s outfitters proudly advertising their rubber boots, aprons, and "fearnoughts" which one assumes was a form of waterproof windcheater. Of course the docks would have been the economic heart of the town.

I was surprised to see an advertisement for Seven-Up: I had no idea that the drink was that ancient. This was long before the ban on tobacco advertising and so there is a full page advert for Old Hoban showing those incredible tins that many of us have still have tucked away in the garage, full of nuts, bolts and washers.

In case the match itself was boring there are diversions to be had in the programme. There is "soccer word", a crossword on purely football-related matters. There is also a footie quiz which includes the great question "How many players in the game's history have achieved a hat-trick on their wedding day?" The answer was two: William Poyntz, (Leeds v Leicester 20 February 1922), and William Holmes (Southport v Carlisle United, 30 October 1954). You wonder if the games were before or after the marriage ceremony.

"Last year was our most successful year as a Supporters Club and we hope to top the membership figure of over 42,000." Yes, you read that right: forty two thousand!

The supporters club is prominent in the programme. It advertises a whist drive every Thursday evening at Blesma House, Deansgate. Not to modern tastes perhaps, but it was obviously working, for they announce "Last year was our most successful year as a Supporters Club and we hope to top the membership figure of over 42,000." Yes, you read that right: forty two thousand! Little wonder that the attendance for this match was a stonking 22,261 and the next home game, versus Middlesbrough, brought in almost as many: 22,004.

The programme was for the second fixture of the season. The previous Saturday the team had opened their campaign with a 3-3 draw at Liverpool, despite losing our keeper to injury and having Cleethorpes-born winger Jimmy Fell take over in goal. The practice of 'bigging up' the opposition clearly did not start with Paul Hurst, because we are told what a tough game to expect against Lincoln despite the fact that the previous two matches against the Imps saw us win 4-1 at Sincil Bank and 4-0 at Blundell Park, and that Lincoln had only narrowly escaped relegation by a single point the previous season.

Kick off was at 6.30 so that the game could finish in daylight. The lights we had in place at the time were not good enough for league matches. The floodlights that we picked up second hand from Wolves didn’t appear until 1960. The ground would have looked very different in those days. The Pontoon Stand was constructed a year later. Of course the much loved Barrett Stand was in situ where the Findus is today. 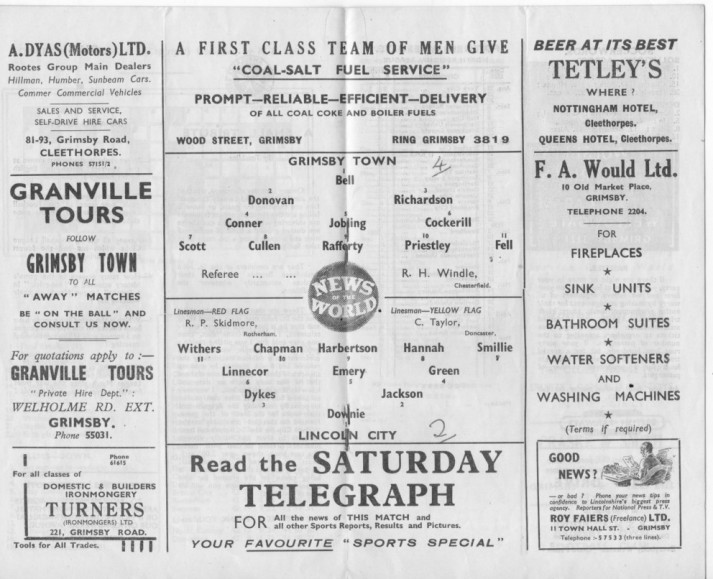 The team was managed by former Manchester United and England centre half Allenby Chilton. There were three capped players in the line-up: Don Donovan (Eire) father of 1970’s Town striker Terry; Mike Cullen (Scotland); and Johnny Scott (Northern Ireland). Scott is widely regarded as one of the finest players ever to wear the Town shirt. He had played in a World Cup Quarter Final just months before. Other notable players included Grimsby born Keith Jobling, who went on to make a then-record 450 league appearances for the club and Ron Cockerill, father of John, the future player and assistant manager under Alan Buckley. The forward line was led by another Town legend, Ron Rafferty, on his way to scoring 146 goals in 263 appearances.

The game itself we won 4-2 with two goals each from Cullen and Scott. The season though ended in relegation to Division Three. In fact all three Lincolnshire teams finished in the bottom five, but Lincoln, with one point more than us, and Scunthorpe, with five more, both survived. Barnsley finished bottom and joined us for the drop.

That August evening match was the first at Blundell Park during my lifetime. A few years later, I made my first visit to the ground and began my life-long relationship with the club.