Because it's Saturday: the Ancient Mariners

Old Grimsby Town supporters never die, they just become Ancient Mariners with memories of glory days. This was discovered by award-winning writer Gavin Bell when he came to Blundell Park, soon after Michael Jolley had been appointed manager, to investigate our enduring loyalty to a team languishing near the foot of the table. We present an extract from Because it's Saturday: a journey into football's heartlands 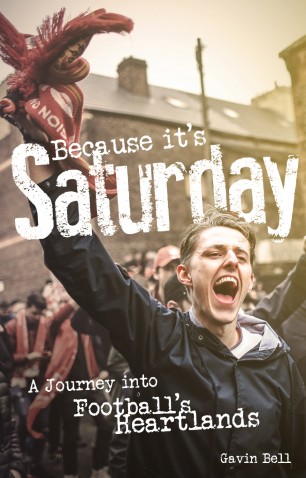 Over the next few days I find that despite their hard lot and first appearances, Grimbarians, which is what they call themselves, are generally a cheery, friendly, down to earth lot.

I meet four of them next morning when they come to my hotel to explain their lifelong loyalty to their team. It is worth mentioning that the club's nickname is the Mariners, a reference to the town's seafaring heritage, and inevitably it has given rise to a loosely affiliated group calling itself the Ancient Mariners. Pete Cribb and Billy Callendar are members of this merry band of brothers of a certain age who play walking football, and roam far and wide over the North Sea in search of kindred spirits from Holland and Germany for international friendlies. Winning for them is of secondary importance to having a good time, which is just as well given the team they support. They have brought along a couple of pals, and we order coffee in the lounge and talk about good old days when the boats used to come in and the Mariners dumped Liverpool and Spurs out of the League Cup.
In the early 1950s Bill Shankly took them to second in the old Third Division North, and with well intentioned hyperbole he lauded the team as "pound for pound, and class for class, the best football team I have seen in England since the war. In the league they were in they played football nobody else could play…you could not wish to see more entertaining football."

A brief golden era in the early 70s saw them winning the Fourth Division under Lawrie McMenemy, who was duly accorded divine status. Pete recalls a vital 2-0 win at Stockport on Easter Monday, when thousands of Grimsby fans stayed to celebrate and wouldn’t get back on the buses.

"The police couldn't move them on, so they called McMenemy out of the dressing room and said can you ask them to go home? So he went out and said 'look lads we've got to get home, we've got a big game on Saturday to clinch promotion, let's all get off home'.

"One of our lads had broken his leg and was walking on crutches, but he turned to the police and said Lawrie McMenemy says it's time to go, so he chucked his crutches away and hobbled off into the sunset and the policeman said 'bloody hell he's not a football manager, he's a bloody Messiah'. It was back page headlines in The Sun."

During his 18-months reign at Grimsby McMenemy, an ex-Coldstream Guard, introduced a novel motivational approach, Billy remembers. "He used to take all the team down to the docks at five in the morning when the fishing was thriving, and make them appreciate what the fans were doing for them, and that's how he became a god really."

Then there were days of Wembley glory in 1998 when Grimsby went en masse to London to watch their team win the Auto Windscreens Shields Trophy (2-1 against Bournemouth), and went back a few weeks later to see them triumphing in the Second Division play-off final (1-0 against Northampton).

"It was a fabulous trip," Pete says of cup final day. "It wasn't just the football, it was the fact the whole town went to Wembley. There were so many buses they had to take different routes, or they'd have clogged the main road out. There were signs on the motorway saying last one out of Grimsby switch the lights off, and first one back put the kettle on." For the record the crowd of 62,432 was the biggest for a sporting event in England that weekend.

Changed days. Now they're lucky to get 3,500 at a league match and Pete feels sorry for a new manager, Michael Jolley, who has just been brought in to try and save their season. There is exasperation and despair in the stands: "He's been left with a load of duffers. They're journeymen footballers and all they want is another payday. They've no affinity to the club or the town, and they're not bothered if we get relegated or stay up because at the end of the season they're all going anyway and they'll get another year's contract somewhere else. They've no heart, there's no heart in the club at all."

Billy bemoans a lack of home grown talent in a team that used to thrive on scouting and developing local youngsters. Now there's only one, his grandson Harry Clifton, a midfielder who is being given a chance under the new manager. Pete agrees: "We're crying out to have Harry in the team, the crowd's been wanting him in for months. He's got a good engine, full of energy. They all wear heart monitors and after his first game the manager called him out and said he was the only one who managed the same energy output as anybody in the Premiership, none of the others got anywhere near him."

Cod Almighty add: Our thanks to Gavin, and to Pitch Publishing for permission to publish this extract from Because it's Saturday: a journey into football's heartlands. Through the 2017-18 season, Gavin met players, officials and supporters from eight different clubs in England and Scotland. He provides a warm account of his journeys, a timely reminder of the huge importance of lower league clubs to their communities.

To buy a copy of Because it's Saturday: a journey into football's heartlands, visit Pitch Publishing