Book review: Laws of the Jungle 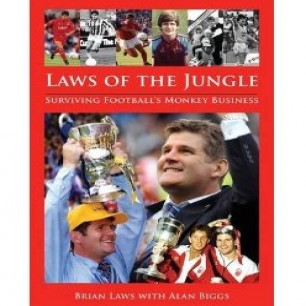 There is a story about a man showing some visitors around his village. "You see these houses? I built these. I built that hall as well. I've been a builder all my life. But do they call me Dai the Builder? No. But because, just once, they find me with a sheep..."

Brian Laws has been in football all his life. However, he is resigned to being known as the man who hit Ivano Bonetti. He almost embraces it, yet it is only one incident in a long career. Starting as an apprentice at Burnley in 1979, he played for such personalities as Bob Lord, John Bond, Bruce Rioch and Brian Clough. He was at Middlesbrough the day the gates at Ayresome Park were padlocked, the club on the brink of liquidation. He was at Hillsborough when 96 Liverpool supporters were crushed to death. He has won four promotions, with Middlesbrough and Scunthorpe, and won four cup competitions with Nottingham Forest. To this record, we can now add that, in Laws of the jungle, he has written a half-decent book.

Half-decent is the precise term. The book tails off in the last quarter. There are some telling details about the financial constraints in lower-league football, like worrying about how many paper cups the players are using and having to ask failed trialists to strip out of their club tracksuits before they leave. However, the modesty with which he recounts his playing career gives way to defensiveness when it comes to his record in management.

Laws concludes his time at Grimsby with a vague "on balance, I feel that I did well for them". He gives full credit to Nigel Adkins for taking Scunthorpe into the second flight but can't help saying Adkins "maintained the continuity and momentum that had built up from the second promotion of my reign". He is careful to note that Sheffield Wednesday and Burnley finished their seasons in lower league positions than they held when he was sacked. This quick judgement on his successors' records is in contrast to the chapter in which he argues managers need to be given time.

This is not the only internal contradiction. The supporters have always to be respected, he says of his popularity among Owls fans. A few pages later, he is bitter about the barracking he received at Burnley.

It would be a poor writer who could not get some entertaining copy out of Brian Clough, but Laws does more than that

If the last quarter of the book is marred by axe-grinding, the first is perfunctory. As a child, he had some "good hidings" which "certainly did not do me any harm". At Turf Moor, he describes being a few feet away when a workman fell to his death through the roof of a stand, then briskly resumes: "Away from the ground, I was living in digs." That abrupt transition betrays signs of haste, and the crisis at Middlesbrough is covered in just two pages, even though as club captain he played a central role in securing the right of the players to a free transfer after they had not been paid for six weeks.

After the skimped early career, there is a sense of relief when Laws is able to write the unmistakably sourced chapter title "Young man, are you good enough to play for me?" It would be a poor writer who could not get some entertaining copy out of Brian Clough, but Laws does more than that. He gives a real feel of what it must have been like to have played for him, the way he made one "feel comfortable and yet uncomfortable at the same time".

Laws made his Forest debut when Stuart Pearce was hauled off for one bad pass, and was to suffer the same treatment himself. He reports how Clough handled it after the match: "'Don't you ever do that again,' Clough ranted, 'and you're playing next Saturday, so get out of my sight.' That was his way. Dropping you down and bringing you up." Amid too many similar stories to choose from, the reader comes to feel that this was not the behaviour of a bully but a man who wanted his players to learn, and who commanded affection as well as respect.

Laws writes with simple, emotional honesty about Hillsborough. Describing how he was waiting to take a throw-in, facing Leppings Lane, you trust his account from the moment he admits: "Looking back, I'm mortified about my initial reaction... We assumed they were idiots and started swearing at them... Slowly we realised these were not hooligans... They were not threatening us, there was real fear in their eyes." Laws captures how the mood in the dressing rooms must have changed - thoughts turning from resuming the match to a panic about their family and friends in the stands - as the tragedy snowballed out of normal human experience.

He brings the same convincing level of detail to his account of the Bonetti affair. He was thinking of what to say to Vance Warner, whose mistakes had cost Town the match, when he found Bonetti already tucking into the chicken wings laid on by Luton. Again, you believe him when he says it was Bonetti who threw the sandwiches and the first punch, that Laws's retaliation was harder than he intended. The sense of shock over the next few days, the PR stunt of a handshake with Bonetti before playing West Ham and his gratitude to the rest of the squad when they won 3-0, are all well conveyed.

Yet this is not quite the whole truth. Bonetti's efforts to help raise his own transfer fee are never mentioned. The contradictions reappear. One minute this is a huge and unprecedented incident that every football fan will remember; the next, far worse things happen in dressing rooms all the time. One is left with the nagging question that, if it was all just as Laws describes it, why did the club end up paying £100,000 in damages and costs to settle the affair?

Don't buy the book expecting too much about the Mariners apart from Bonetti... Paul Groves is one of only four Grimsby players mentioned by name

Don't buy the book expecting too much about the Mariners apart from Bonetti. Those who have never forgiven Alan Buckley his successes will enjoy the tale of how he tried to get his son's contract with the club paid up, and might find Laws is inclined to their view that, even while managing West Brom, his first duty should have been to Town. Paul Groves is one of only four Grimsby players mentioned by name and also one of the few whose loss to the Hawthorns Laws regretted.

Laws of the Jungle, finally, is fascinating because it is warts-and-all. Explicit admissions of guilt are rare. He regrets turning down the opportunity to remove Kenny Swain as his assistant, but this is of the "I was just too nice" school of confession. Nevertheless, Laws provides enough detail to allow readers to make up their own minds. Sometimes he is too honest for his own good. Some of the sympathy he built up during his account of Hillsborough he squanders by repeating the milder canards against the behaviour of Liverpool supporters (although he swiftly reclaims it by recalling the impossible circumstances in which the match was replayed and John Aldridge's supreme gracelessness, congratulating Laws on the own goal that won the game for Liverpool).

The picture of Laws that emerges is of a man whose self-image is important. He thinks a lot about himself and it is important to him that he thinks well of himself. He describes in some detail two or three genuinely good deeds. The risk of being thought disloyal perhaps leads him to rush over the crisis at Middlesbrough and there is also a defensive tone about his decision to leave Scunthorpe. Sometimes, he thinks a lot of himself as well. He believes he "carried a little bit of a 'name'" when he took over at "little Grimsby Town".

Laws describes himself as an average player, and writes that success is down to team spirit and togetherness. His mistrust of maverick players is evidenced by his frustration at watching Stan Collymore coast through training. He makes explicit his resentment at Bonetti's "superstar" behaviour, the demands he made on the time of an overworked player-manager. It is that detail which makes it believable that a lot of pent-up frustration went into his punch.

It is also that detail which means we cannot regard the Bonetti affair as an aberration. Laws the football man cannot quite be separated from Laws, the manager who hit Bonetti.

Share your own thoughts on Brian Laws or his book on the Cod Almighty feedback form.