What mix of old hands and new talent brings success? Richard takes a look at the make-up of Town's promotion-winning teams

When you have been watching Town for a few decades your memory tells you that the secret to promotion is X, Y or Z, but you're never entirely sure. Instinctively many of us think that a settled side, made up of players who have got to know each other and the club over time, may well be the ultimate magic spell. Others think its all about changing the manager.

This was the starting point for a recent debate on Twitter, although it swung eventually onto our budget, our geographic isolation and the club's infrastructure. You can read the whole thread here.

If you sack a manager in a business it’s usually down to them being rank average, incompetent, lacking effort or poor results down to one of the first 3. Football brings a random factor into this. On balance I think Hurst and the team have had a mixture of a lack of luck in a https://t.co/8zqrw9D760

Despite Hurst arriving just over a year ago I don't think he's had enough time when you take into account that his first window was handicapped by Covid, uncertain ownership and the influence our league position had on our ability to attract players. And it was this which set me looking at how long our successful teams had been together before they won promotion.

What follows is a cut-and-paste job from a spreadsheet, but nevertheless a clear pattern emerged. New players are shown on a white background, players who had been with the club one season on green, two seasons on red and three or more seasons on blue. Where players had returned to the club for a second spell, the date of their return is given. 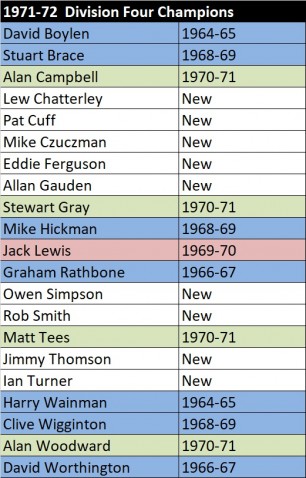 Bobby Kennedy was Town manager from March 1969 to May 1971. We finished 19th out of 24 in 1970-71. Then came the Messiah - at least for a short while - Lawrie McMenemy. But the team that won the Division Four title in 1972 were not all Lawrie's men by a long chalk: Boylen, Brace, Wiggy and Worthington had been at Blundell Park for three or more seasons. That almost seems surreal in our current world. Barry Whittleton recalls that Brace and Tees were mission critical and that Gauden and Chatterley joined at Xmas and helped pull us up the table from 10th. 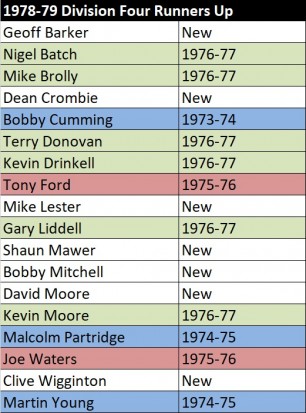 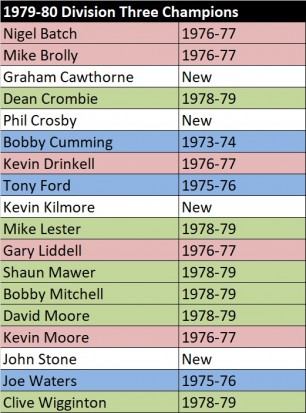 John buggered off to Derby and his first team coach and great bloke - I'm told - George Kerr took over. We were bloody brilliant while winning the Third Division title. I really liked Kev Kilmore the striker and John Stone at right back. The majority of the team had a lengthy GTFC history. In fact only four out of the eighteen joined in 1979-80. 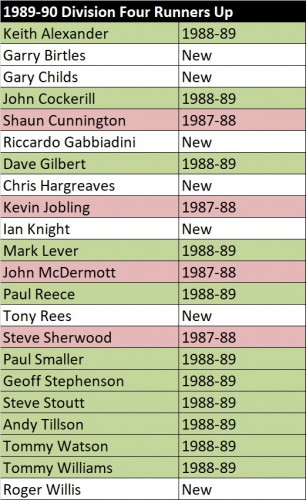 Alan Buckley became manager in June 1988 and we finished 9th in his first season, taking time to build. Only four players in the promotion winning team had signed professional contracts for Town before Buckley's arrival, although youth players Mark Lever and Tommy Watson had also already made first team appearances. It was definitely a Buckley team, with no "old timers" who'd been with us three or more seasons, but 70 per cent of the players were not new to Cleethorpes that season. 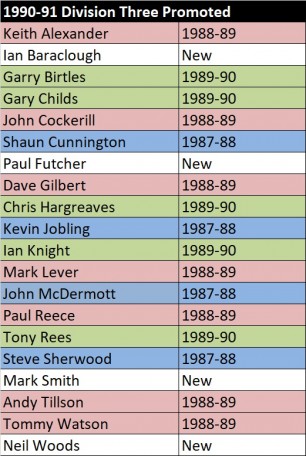 Maybe winning and winning promotion are a habit. Alan Buckley took most of the previous season's squad forward to win a second consecutive promotion in 1991. Not only was this one of the most stable squads in Town's recent promotion history, those who watched these players could clearly see they were better players than the division three or four they had started in. It was a team of second-flight quality.

If we'd known what was coming in the next century when we won promotion via the play-offs with Buckley, we'd have relished it all the more that day at Wembley. Buckley may have been the "sort of" new boy at the start of this promotion season, but looking at this list of 29 (!) there are some fantastic players that pre-dated Alan's second coming. Woods, Jobling and Macca were still hanging around since his first stint and of course three of the "new" players - Groves, Gilbert and Dobbin - were, like Buckley himself, returnees. Donovan, Davison, Nogan and Burnett were the most inspired of Buckley’s new arrivals. Despite there being a strong backbone of long serving players, this promotion was definitely won with significant help from the new boys.

Following almost 20 years of pain and many managers (Thanks John) Paul Hurst took us back to the Football League via Wembley at the second time of asking. After one full season managing Town with Rob Scott, Hurst took sole charge in September 2013. In his first full season as Manager he took us to a Wembley play-off final with Bristol Rovers which we lost. The following season we went up after beating Forest Green in the play-off final. The whole squad had joined under Hurst or Hurst and Scott.

Of the players who'd been at Blundell Park the previous season or two, six players - Clay, Disley, McKeown, Toto, Pearson and Robertson - played a significant role.

There have always been key players - at least six and usually more - who have been with Town for a season or more in our promotion seasons. New faces did play a significant part in our last promotion from the National League: does that tell us something about non-League football or Hurst? We'd need to look at other teams who have won promotion to the Football League to know.

The conclusion I draw is that with the gift that Holloway and Covid-19 gave us it would almost be a miracle if we gained promotion this season with barely anyone apart from Luke Waterfall featuring very regularly this season and last.

I am firmly in the "Hurst in" camp: he is a good manager and he'll get it right given time. He works hard and there's no doubt he can spot a player. I've seen all the games this season and although what we've been served up on our travels has often been dire we've definitely had a lack of lucky breaks recently and could easily be sitting six to eight points higher.

What is good news is that we have around 12 players who we'd like to retain for next season. If we acquire a couple more good 'uns over the next month then Hurst can find us the Lew Chatterley, Bobby Mitchell, Kevin Kilmore, Tony Rees, Neil Woods, Kevin Donovan or Podge of 2022-23.

Get rid of Hurst and it would all go back in the melting pot. Since Lawrie McMenemy we've had 36 (Thirty-six) changes of manager:

What do you say?