Pete Green is a Sheffield-based poet and musician and works as a communications manager. They contributed to Cod Almighty as an editor and writer from the site's inception until 2019.

Why are you a Town fan?
I became a Town fan in April 1979, the first time my dad took me to a game. John Newman's side had already secured promotion, and at this point, fans of other clubs would have an inspirational story – falling in love with the roar of the crowd, the belonging, the scent of tobacco smoke and fried onions, the conquering heroes on the turf down below. This being Grimsby, of course, the team lost 4-3 to Doncaster and their fans booed and jeered them off the pitch.

What "should" be your team if you followed the family tree?
Grimsby Town. Like most Grimbarians, my DNA is resolutely unexotic and my furthest-flung ancestor over the past 400 years was from Caistor. 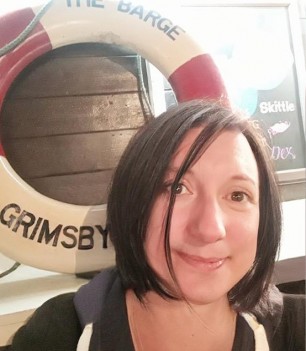 How did you get involved with CA?
In the late 90s I got to know a group of other Town fans through an email list. A handful of us, who were all based in different cities, started meeting up around away games for a few beers and a natter. After about the 18th time we watched Town lose away at Wolves followed by a big drinking session in Birmingham, we decided to make Cod Almighty.

The finer details of this plan are a bit hazy after all this time, but in all honesty we'd drunk so much Guinness that the finer details of this plan had already become fairly opaque by the following morning. Basically it would be a fanzine, but on the web. It would look good and read well, but in a voice that represented fans rather than trying to imitate mainstream football media. And it would never, ever have any adverts. It would be a lot of hard work, but none of us had children at that point, so it actually turned out to be achievable.

Which Cod Almighty feature would you like to see return?
Meek's Football Clichés always made me laugh, and the source material is practically inexhaustible.

Have you been up or inside the Dock Tower?
My mum has abseiled down the outside of the Dock Tower from the top, because she's absolute nails. I tried to go up in 2008. Apart from the steps it's completely empty inside, like a disappointing chocolate egg. About a quarter of the way up, the polythene safety barrier became too tenuous, so I started bricking it and a man had to take me back down. Maybe I was adopted.

Which Town player have you found yourself near and where?
There I am in Swigs one night in the early 1990s, minding my business with a pint of Old Groyne, when Chris Hargreaves rocks up, fresh from being sent off while playing on loan for Hull. Bless him. Absolutely gutted, he was.

Which player do you love and why?
There won't be a great many professional footballers who listen to Belle & Sebastian, and Martin Gritton seemed quite surprised when my wild guess about his taste in music turned out to be bang on the money. We've not quite managed to be in the same northern indie club at the same time, but we've exchanged a few friendly words online, and if I describe him as a sort of lower-division Pat Nevin then I'm sure Martin would take it as the huge compliment that it is. He had a decent first touch as well.

Are you bothered which division Town are in?
Ultimately I don't give a monkey's bollock. I really don't. I mean it's nice when you win games and get promoted, of course it is, but I can't buy in to this modern mindset that you have to foam at the mouth and want everybody sacked because you're 'only' ninth in the league table. It's not a good look. It's probably not great for your mental health either.

Admittedly, I didn't always feel this way, but I've gained some perspective as I've got older. If my team wins games and gets promoted, I'm happy, but if it doesn't, I'm still fine and I don't get cranky any more. It's the best way to be. If you still have enough energy to get angry about something, save it for the Tories.

Have you ever exchanged words with Alan Buckley – or even with a lesser manager?
I met AB at the launch event for the We Are Town anthology and he was ever so nice. There was a notion that he could be a bit bristly, but he was perfectly approachable, with quite a humble manner.

Lesser? I once received a phone call from a very cross Russell Slade, demanding my appearance in the changing room to apologise in person for being mildly satirical about his players in my Grimsby Telegraph column. I mean, really? Thin-skinned much? God help them if they ever looked at the Fishy.

Have you ever played football with, or against, any Town player?
I was two or three years below Chris Grocock and Lee Pratt at Old Clee school, where I vaguely remember being on the same playground while a ball was being kicked around the asphalt. They banned full-size footballs, so we had to play using a tennis ball. Think of it as a Grimbarian equivalent of Brazilian kids in the favelas learning o jogo bonito.

How many Town mugs have you got?
One. It's a mock-up of the Ceefax page giving the result of the 1998 Auto Windscreens final. So it ticks two nostalgia boxes – one for teletext and one for Grimsby being any good.

Do you care about the national team?
Which one? I'm a signatory to the constitution of the Yorkshire International Football Association and I've just been to Molineux to see the Lionesses beat Germany in the Arnold Clark Cup. If you didn't see it on the telly, log in to ITV Hub and watch Kirby win it with the last kick of the tournament. Fantastic entertainment.

England men were a write-off for a time, of course, but the current team are such a lovely bunch that you can't help rooting for them. Look at them taking the knee and triggering the gammons. Henderson's solidarity with non-binary fans. Rashford saving the world. Maguire's cute face. It's coming home!

When we find ourselves in times of trouble do you have you a secret second team that you turn to?
I make no secret of holding a season ticket at my local club Hallam, who are currently on the crest of a wave, with record crowds and massive goalfests. You should come. I see one or two other Town fans there occasionally, who may also be attracted to the club by the friendly welcome, the nice beer, and the clubhouse not hosting any election rallies for smirking fascists.

At the time of writing we're top of Division One in the Northern Counties East League, duking it out with Marcus Newell's Brigg Town, who the Shed End greeted last season with the memorable chant "Grimsby tactics, Grimsby kit/You come from Brigg and you're fucking shit".

Have you got any Cod Almighty T-shirts?
Loads! My favourite is the Macca in limited edition red, which was only available to the CA editorial team. There has to be some reward for putting in hours of labour on the site every week for 17 years.

Have you infected anyone with the Town? How are they today?
My bff Marianthi grew up supporting Olympiacos but became a Town fan when they started coming to matches with me and Sam Metcalf in the late noughties. They're now in recuperation with Dulwich Hamlet.

Have you ever walked around Chapman's Pond?
When I was little I spent a lot of Sunday afternoons walking around Chapman's Pond and catching stickleback in a net. Much more recently I got a bit fascinated by it and read up on its origins – the pond was formed when clay was dug up for a brick factory and then the pit filled up with ground water. Today some private company claiming to 'own' the pond has fenced it all off, because England in 2022, but the drone footage on YouTube is totally worth a look.

Have you ever watched Town from the wrong end? How did you survive?
When I lived in the midlands and I was too skint to travel to home games, I used to go down the Hawthorns with my mate Jess, who was a big West Brom fan and used to get cheap tickets through her dad's work. At the end of the 1993-94 season I stood on the Brummie Road end for its last matchday as a terrace, before they put seats in, and coincidentally GTFC were the visitors. I clapped politely when Kevin Donovan scored the only goal of the game for the Baggies and I didn't mind losing too much because we were already safe from relegation and Paul Futcher played an absolute blinder.

Where have you been the most miserable when following Town?
The day Town took the lead through Darren Mansaram and ended up being beaten by ten men. You remember. Tranmere away on the last day of 2003-04. Got lost twice, got punched in the eye by Mark Stilton, got relegated, got stuck on a train with a hen party, got drunk on Stella Artois, cried and threw up in a gutter.

And what's the high point?
It's an obvious one, but it's the 2016 play-off final. The previous year my kid burst out crying when we lost on penalties. This time, before we left the house, I actually promised him that that we'd win. What kind of idiot does that? I was on a roll though. At half time I told him Forest Green would pull one back on the hour and it would get a bit edgy for a while, but we'd still do it. Nobody foresaw that finale though. A golden chance to make it three… it's Nathan Arnold, it's Grimsby's day... and for the opposite reason it was my turn to blub this time.