Mark Stilton is a Sheffield-based data and business intelligence leader and retro-gaming aficionado. He has been involved with Cod Almighty since its inception and still dips in from time to time. Specialist subject: Fenty 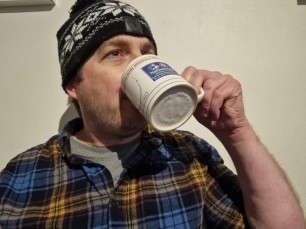 I was born in Grimsby and, after being taken to the odd game over many years, I finally picked up the bug in my early teens.

What "should" be your team if you followed the family tree?
If you go back a few generations it would be Boston or King's Lynn. Christ.

When did you first write anything about Town?
It will have been the old mailing list. And I mean the pre-Topica one where you had to copy everyone's email address from the last email and paste it into the to: box.

It was probably an argument with BillO or Swin, I imagine…

How did you get involved with CA?
In the early days of the web I stumbled across Ant Wood's GTFC page (the first on the web) and within it a small GTFC mailing list. On that mailing list I met other exiles across the UK and we started meeting up at away games. That group included Pete Green and Si Wilson, who came up with the idea for CA, and Tony Butcher, ace match reporter. I was there from the start, contributing various bits and pieces.

Which Cod Almighty feature would you like to see return?
Donk (Dawson) will hate me for this, but Codswallop used to have me in stitches. That and Gary Gaffer. Actually, there should be a Gary Gaffer spin-off website.

Did you ever call Clubcall? If so, where from?
What am I? Rich?

Where was your first seat/standing position and where do you like to sit now?
Sat on the barrier at the half-way line in the lower Findus. Me and my friend used to get to the ground as it opened just to get that spot. I have no idea why – it's probably the worst position to view the game from. It was perfect for heckling opposition players though.

The past 20-odd years I've been on the back row of the Pontoon, behind the goal.

Is that even a shop? It must be…

Are you bothered which division Town are in?
We are the yo-yo champions and I want us to retain that trophy. So if we go up, we must come down and vice-versa.

I just want to see us play decent football and hopefully win. I'm not hung up on man-made hierarchies.

Favourite John Moore or Rolyism?
It's a tough one. Either "It's a small gantry, as Donovan comes forward", or "He won't get that. OH! HE DOES DO!"

What or who did you get wrong?
My judgement, including selection of appropriate pastry-based products to eat at half-time, has always been 100% spot on. I probably thought Newell was going to be okay, if I'm honest – but even then I had a healthy suspicion of him.

There are plenty of players who I have willed to be better but who have sadly let me down. I don't think I'm unique in that regard, though.

Which player do you love and why?
Dave Gilbert was such a great player to watch when I first started going that he always stands out for me. Mendonca was, of course, amazing.

But I think I tend to go for those players that are a bit flawed – I don't want to feel inferior, so it's better to compare myself to someone who isn't perfect. Thomas Pinault once overtook me at speed on the flyover before a game – he appeared to be smoking heavily as he bombed past. I liked that.

I loved Georges Santos – the man was an absolute towering menace. He always looked like he could kill a man at any moment. He walked his own path – which may have taken him in the wrong direction, but hey, if Georges wanted to go that way, that's the way he was going.

And Paul Groves. Just because. I think history needs rewriting on his management career with us. Against the odds he kept us up in a much higher division than we've been for a long time. He was truly stuffed – by the fall out from ITV Digital and by Fenty and Furneaux fiddling in the background as BP burned. I hear the claims of "he'd lost the dressing room" but I still think he'd have turned it round.

When we find ourselves in times of trouble do you have you a secret second team that you turn to?
I like to look at teams also having a shit time, it makes me feel better. I don't support them, I just follow their results and hope they do worse than us.

Have you infected anyone with the Town? How are they today?
My son was born in Yorkshire, but I've taken him to Town games since he was about six. He's had a season ticket for nearly ten years now.

He doesn't follow any other football at all. The only football he knows about is Town. He could barely tell you who the other teams are. I like this and I am proud of this.

Have you ever watched Town from the wrong end? How did you survive?
A few times. Chesterfield away in a cup replay. Groves scored an absolute beauty and an old guy behind me who could see I was supporting Town said to me "bloody good goal, that".

I sat in the home end when we played Leeds in the cup. Me and my cousin were sat in the stand right next to the Town fans. We'd not managed to get away tickets, so just paid on the day to go in the home end. It was pretty awful – we had to stand and politely clap when Leeds scored against us. In the dying minutes of the game, it all got a bit much for my cousin. A town player went in hard on a Leeds player just in front of us and my cousin stood up and screamed "break his fucking legs Town". Thankfully all the meatheads who'd been sat near us had already left by that point.

Where's the wettest you've been watching a Town game?
Cambridge away – early Buckley-era. Maybe 89/90 sort of time. It was over Christmas, we were on an open terrace and it was absolutely chucking it down. This was John Beck-era Cambridge too, so they'd dug big holes in the pitch that Diddy Dave kept falling down, and then won 1-0 with a massive punt that glanced off Dion Dublin's head.

And then I had to sit on the coach back home. And I caught the flu.

Who has had the most fantastical hair you’ve seen at a Town game?
Tony Butcher. It's fantastically sensible.

Where have you been the most miserable when following Town?
I have been lost in Burslem on a Tuesday night, having wrongly walked towards factory foodlights in pre-google maps days. But that was pre-match, so I was probably feeling optimistic. I've been lost in many towns pre-football actually…

Most miserable was that Burton away game though. Not so much the relegation, because that had been coming all season, but the absolute knob-ends who decided to smash the town up before and after the game. And STILL nobody went after Fenty…

And what's the high point?
There were some fun away games in the old second division – winning games against the odds. Liverpool was an odd one because I really never took to Lennie Lawrence, so although it was amazing in one sense to be there, I felt slightly annoyed that it meant "Robin" would be hanging around a little longer.

I think that third goal at Wembley to get us out of the Conference (thanks Fenty!) is probably the most elated I've felt. Or was it relief? I'm not sure.

Seeing Steve Evans booted out of BP was very enjoyable.

Did you ever see Glen Downey?
I think I saw him polishing Russell Slade's Mercedes once…