Nottingham was a popular away day for Town fans but even in the 1920s and 1930s it did not always pass without trouble. Pat looks back.

When Grimsby played in Nottingham on 5 January 1929, any disorder came from the home crowd. 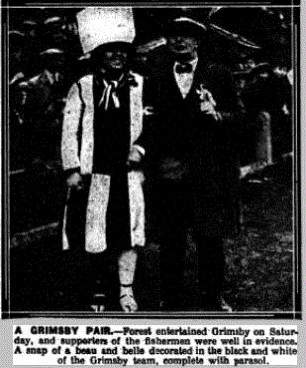 The score still 0-0, in the second half the Town centre forward Joe Robson shot from an acute angle, the ball found the back of the net and the referee awarded a goal. The Nottingham Forest goalkeeper was furious. First he insisted that the referee consult both the other officials then he demanded that he inspect the netting, showing him a gap through which he said the ball had passed, outside rather than inside the post. The referee stood by his decision and play resumed, but not for long. The police were called to quell the Forest supporters who had continued to protest.

That one contested goal gave Grimsby their third consecutive win. They were on a run which would take them from mid-table to the top of Division Two. Their form stuttered slightly at the start of April but when they beat Wolverhampton Wanderers on the 13th they were second, two points above Notts County who only had two games left to play. Town's next game was at Notts County: if they won it, they would be guaranteed promotion to the top flight.

For the next week, Grimsby and Cleethorpes were full of happy industry as people planned how they would get to Meadow Lane, and how they would make sure that they enjoyed the day to the full.

Travelling to watch Town away from home was not part of the regular supporters' routine between the wars. Many of them worked on the docks on Saturday morning so they had a quick lunch before heading to Blundell Park, to watch the first team one week, the reserves playing in the Midland League the next.

There was no supporters club to arrange transport, but pubs and societies ran outings clubs, their members paying in regularly in preparation for a big excursion. Then they'd book their places on special trains chartered for the day, or hire a charabanc. Nottingham had always been a popular destination: there had been a good showing of Town fans at the Forest game and a local newspaper had taken a picture of two of them, in fancy dress.

Now those outings clubs were in full action: everyone who could find the time and the money wanted to be in Nottingham on 20 April to see Town go up. Eight trains were booked to make the journey from Grimsby and Cleethorpes (with more from Louth, Mablethorpe, Lincoln and even Derby) and the Grimsby Telegraph announced the arrangements: day train one leaving Cleethorpes at 7.45am, stopping at New Clee, Grimsby Docks and Grimsby Town, arriving in Nottingham at 10.38, with space reserved for the West Marsh Artisans, the Strugglers Arms, Talbot Inn and Hainton Recreation Club; a second train leaving 20 minutes later with groups from the Globe Inn, the Packet Tavern, the Loco Tavern, ...

A group of supporters were allowed to parade around the touchline in fancy dress, holding placards that said "Eat Grimsby Fish". Town fans filled the enclosures and their bugles filled the air, so that the home supporters must have felt like strangers in their own city

So on Saturday morning the exodus: charabanc parties and a convoy of motorbikes as well as the trains. They arrived in a city dressed in black and white, some for the County, much for the Mariners. All week people had been making their own rosettes and hats but there were also street sellers ready to take advantage of anyone who had not. There were perhaps 8,000 Town supporters in the city: the local paper reported that "Nottingham had not known such a football invasion for many a long day."

The gates at Meadow Lane opened at 1.45 and immediately the turnstiles were clicking, fully an hour before kick off. A group of supporters were allowed to parade around the touchline in fancy dress, holding placards that said "Eat Grimsby Fish". It was the town's day in the spotlight, an opportunity for advertisement. Town fans filled the enclosures and their bugles filled the air, so that the home supporters must have felt like strangers in their own city. The match was a shot to nothing for Grimsby. They still had three more games to play so they were promotion favourites whatever happened on the day, but when the teams took the field, the Mariners in white, County must have felt half beaten already in the face of their visitors' ebullience.

The only causes for concern for Town were injuries to Joe Robson and the outside left Billy Marshall. Robson's deputy, Tim Coleman, had already proved himself an excellent footballer but Norman Wright had been less convincing. Any worries were swept away when the two combined first to put Grimsby ahead and then to restore their advantage almost immediately after County had levelled. The clock ran down and the Mariners were waiting only on the referees whistle to begin a night of celebration. With the last kick, a County forward pushed the ball past Tommy Read, the Grimsby goalkeeper, who had come far off his line. It rolled and it rolled but finally it rolled past the post and the party could begin: Grimsby had won and in August they would be in Division One.

It must have been the happiest day of many people's lives, one they remembered forever, even if some of the details became hazy. Those chartered trains were not due to leave Nottingham until almost 11 and the local licensees must have made a very profitable consolation from the failure of Notts County.

Promotion meant an end to the Nottingham excursions for the next few years. In October Grimsby and Cleethorpes filled 12 short trains to Leeds instead, and were stunned into a silent return home as the league leaders won 6-0 and the reality of top-flight football began to take hold. Even so, the Mariners survived three seasons in Division One.

By 21 October 1933, Grimsby were back at Notts County, at the start of another winning run which would end with the Mariners champions of Division Two. Another 2-1 win was cause enough for another celebration.

From the coverage of the local newspapers, Nottingham seems to have enjoyed the colour Town supporters brought to their city. But even in the 1930s football fans, like anyone else, were likely to do foolish things if they drank too much. And even then they could provoke a moral panic. On the Monday morning after Town's win, the local magistrates court dealt with some of the repercussions.

Two men - a fisherman and a fish porter - were separately charged with having stolen half-pint tankards from the Old Original Dog and Partridge. Police constables at the station had spotted them with bulging pockets and the fisherman had said "I have only got a souvenir": a tankard in each pocket. In court, the constables corroborated their defence that they had been under the influence of drink and they were discharged after being ordered to pay 5 shillings in costs.

One woman was too ill to attend her hearing. She had cut her head and needed stitches after falling onto the tracks at the railway station. Drunk, she had fought off the people who tried to help her. She was fined £1 in her absence.

The Nottingham magistrate summed up the proceedings: "I object very much to these people coming from Grimsby or any other place and upsetting the morals of this city."

Pat is researching a history of Grimsby Town in the 1920s and 30s, likely to be published next year. Follow Golden age GTFC on Twitter to keep track of his progress