Ivano: the man and the myth 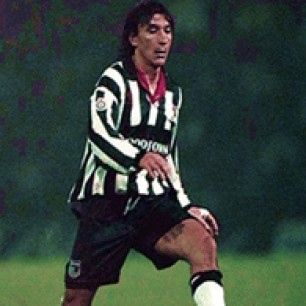 Autumn 1995, and Ivano Bonetti arrives at Blundell Park: a 31-year-old Italian with a proven record at Sampdoria and Juventus, from a footballing family and looking for a new challenge.

There was instant excitement. Bonetti added 2,000 to the gate for his first reserve match, and then he made an immediate impact in the first team. He scored twice as Town went unbeaten through November, climbing to second in the second flight after we beat Tranmere. I was there among hundreds of fans chanting "Ivano!" and "Bonetti!" and wondering how far our new star could take us.

Steve Plowes, the editor of the fanzine Sing When We're Fishing, told the Independent that "Ivanomania" had galvanised the place. At the time Newcastle, inspired by David Ginola, led the Premier League. It was as though Town player-manager Brian Laws had found our own Ginola, the creative spark in a team he dared to say could challenge for promotion. Paul Savage, a future chair of the Mariners Trust, recalls a 7-1 FA Cup win over Luton: "Bonetti played with a fearless, carefree arrogance... he marauded down the left wing in that game, scored one, made two and I remember thinking 'how on Earth is he playing for us?'"

Bonetti was contracted to an unauthorised agency so the club could not pay a fee to secure him for the rest of the season. The fans raised half the £100,000 needed, the rest Bonetti paid himself. It was a situation which should have raised questions - how had an experienced Serie A footballer got himself tied to such an agency, and shouldn't he have got out of it before seeking a new club - but they were questions to which no one wanted answers amid all the excitement.

It didn't last. Town were already sliding down the table when Bonetti scored one last goal on 3 February in a 1-1 draw with Derby County. Next week we lost 3-2 to the same Luton side we had put seven past a month earlier, and afterwards Laws and Bonetti came to blows in the dressing room.

Nineteen games for Town are insufficient to make Ivano a Town legend. He is a cult hero who brought hope, joy and excitement

It was an incident much discussed, yet the details remain hazy. In a recent DN35 podcast, John McDermott described how he visited Ivano in hospital, and found him in good form, so he was surprised to see the news coverage hours later, the Italian confined to bed and apparently exaggerating his injuries. Laws and Bonetti made a gesture of reconcilitation a few days later and both remained at the club until the end of the season. Then Bonetti left and Laws was sacked in November.

Nineteen games for Town are insufficient to make Bonetti a Town legend (neither are six games of Dave Beasant or twelve by Andy Todd). He doesn't compare with the other wingers of the era: Dave Gilbert and Gary Childs managed almost 500 games between them for Town and Tony Ford, over two spells, clocked up more than 400. A large numbers of games do not make an automatic legend, but the category should be reserved for a special few.

Ivano was a cult hero. He belongs with Chima Okorie and Zhang Enhua, experiments who brought hope, joy and excitement but whose stays were short. He brought attention to the club but there's a tendency to remember the positive moments and forget the negative elements. Maybe at the speaker night we will finally hear Bonetti's side of the story, but for all the great memories, it is a shame how it ended in controversy.