Pat Bell has been, at different times, a feature writer, diarist, editor and postbag editor for Cod Almighty since 2004. He has supported Town since 1974, from Aberystwyth, Swansea, London, Torquay, Abersystwyth (again), London (again), Hove and currently Manchester. 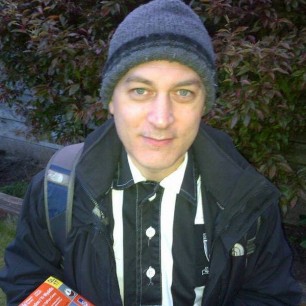 The short answer is because I was an obnoxious, perverse kid who liked to make himself seem different. The long answer is because I grew up in Aberystwyth, miles from anywhere large enough to have a professional team. My dad was born in Cleethorpes and we had relatives there who we visited most Christmas and Easter holidays, so Grimsby Town were my first exposure to League football.

What "should" be your team if you followed the family tree?
By genealogy, I should be a Town fan: my grandfather was quite keen, my dad less so. I was actually born in Hertfordshire but we left there when I was three so I don't feel I'm being a glory hunter by not supporting Watford or Stevenage.

When we find ourselves in times of trouble do you have you a secret second team that you turn to?
I wrote an over-long and self-indulgent piece about this. Having never lived within easy reach of Cleethorpes, I've tended to hook up with whatever non-League side I find myself near: that's been Trafford for nearly two decades now. They were seven leagues below Town when I moved here in 2003, now it's only three. I also keep an eye out for Aberystwyth Town and in rugby London Welsh. London Welsh are a phoenix club now and win more or less every week as they zoom back up to their old status, but all the soccer clubs tend to be headaches to take my mind off the heart troubles that Town give me.

Where was your first seat/standing position and where do you like to sit now?
We used to stand at the Imperial Corner as boys. When it was demolished the Lower Findus seemed the natural inheritor of its kind of wry partisanship, but now I like to sit in the Main Stand so I can shut my eyes and pretend I'm watching Jackie Bestall and Pat Glover if it isn’t going well.

Did you ever call Clubcall? If so, where from?
Yes, far too much; from coinboxes, for heaven's sake.

Years ago I also had a ridiculous idea of the kind of set-up at Blundell Park which came of listening naively to some things an Arsenal-supporting friend said. She described ringing Highbury to find the score as there was bound to be someone there for the reserve team game even if the first team were away. I tried ringing Town one night after an evening game. The phone rang for ages before a voice which was both bewildered and peremptory answered. He told me we'd won 5-1, having no doubt calculated it was quicker to just tell me than call me a prat. I'm almost sure he had an East Midlands twang, which could only have been Alan Buckley. Just as well we did win as even over a phone line he'd have done me some damage otherwise.

When did you first write anything about Town?
I wrote a banal letter to an early edition of SWWF and then was a semi-regular contributor to it.

Once I submitted two pieces in one envelope (this is way before email, obviously), one of which was a version of the Rime of the Ancient Mariner. A few days later I was standing with Bill Brewster on the away terrace at Brentford. The chap whose address SWWF used for correspondence came up to Bill, gave him my letter without knowing who I was and said "There's two things here: the article is good but the poem is shit."

How did you get involved with CA?
I was on an old Grimsby Town mailing list when Si Wilson started talking about this new site he was helping set up. Writing is the thing I do, so once it got going I was always likely to become a contributor. My first substantial article was about how Town success almost always coincided with Tory Governments (a link John Fenty well and truly busted). It wasn't very good – I was trying to fit in to a certain self-imposed old-fashioned fanzine style, not willing to stretch myself.

From Tony's match reports to Tommy of the Town and the range of ways our writers tackle the diary, the great thing about Cod Almighty is that it allows and encourages contributors to develop their own voice, just so long as they take the trouble to do themselves, their ideas, and our readers, justice. Pete Green and Donk Dawson were excellent at giving enthusiastic but also constructively challenging feedback on articles in draft.

Which Cod Almighty feature would you like to see return?
Mark Shephard was brilliant at precisely skewering the inanities of messageboard contributors in Nesbit of the Week.

Which Town manager have you found yourself near and where?
I blanked Paul Hurst in the Blundell Park car park. I am astonishingly bad with faces, at least with people I've only seen from pictures or across a football pitch, and he was just a shortish guy in Town gear. I thought he looked like Hurst but I wasn't sure, so when he said hello and was obviously ready to stop for a few seconds I just gave a non-committal start-and-close-the-conversation "Hello" back at him.

Which player do you love and why?
I can dress up and justify my admiration for Neil Woods with all kinds of sound, football rationale but actually I felt somehow, with his lack of pace and his lapses of self-confidence, he was the nearest thing we had to a footballer I could associate with. I used to imagine a planet populated by a race of Nordic gloominess where running 100 metres in 15 seconds was considered a major athletic achievement, and where Woodsy would have been globally revered.

Which former player do you loathe and why?
Paul Linwood is an obvious answer, but bear with me. He made no particular impression on me in his season with Town but I remembered the name when he turned up as a Trafford player a few years later. Two other local Town fans and I paid £100 between us to sponsor him and another of their players. He'd left Trafford by the time he gave that interview belittling all of Grimsby and Neil Woods in particular when he described the round-the-clock drinking among Town players under Mike Newell as though it was all one big lark. That's £16.67 I'll never get back.

Curtis Woodhouse was overrated, both by us and by himself, and the Town fans who used to wet themselves at the idea he might join our management were an embarrassment. But if I paid too much attention to ex-players' social media accounts I'd find I'd have to revise my opinions of several heroes, so let's not go there.

What or who did you get wrong?
It's in the nature of supporting Town that you have to suspend disbelief and let yourself get fooled by every new player. I remember likening Rob Atkinson to Andy Todd (admittedly making allowances for the fact we were two divisions lower by the time he came to us on loan).

Socks: Red, White or Black?
Red. For my dad’s birthday once I bought him a black and white striped Subbuteo team and spent days painting their socks red. My brothers and I got loads of use out of that team – I'm not sure my dad ever did.

New ground or redevelopment of Blundell Park?
Even a fanzine editor is allowed to sit on the fence now and again. Was it Retro Diary who wrote that it'll be a huge wrench if we ever leave Blundell Park, so let's make sure we move to something worth moving to? I agree with that.

Do you care about the national team?
For me the national team is Wales, and the answer is a bit. I enjoyed being in Sicily when we beat Belgium in the Euros and for once not having to explain, or be persuaded it wasn't worth trying to explain, that I'm not exactly English. But if I was offered one of those pacts that soccer fans talk about but which will never happen then I'd accept the Welsh soccer team sinking to Luxembourg status if it meant Town staying a couple of divisions higher. I'd have to think about it a bit if it was the Welsh rugby team though.

Where’s the wettest you’ve been watching a Town game?
I was raised in mid-Wales and I live in Manchester - I can get quite euphoric in the rain. We got drenched in two of my happiest games: the 2-0 win at Southend in 1990 which more or less guaranteed promotion, then when we beat Fulham in one of their moneybags phases.

And what's the high point of watching Town?
I wasn't following closely enough in 1981 – I was still a schoolboy in Wales – to know how close we were then to winning promotion to the old Division One. The one time a return to the top flight felt possible to me as an adult was when we won 1-0 at Ipswich in January 1999, after Peter Handyside scored with an overhead kick. That put us in the play-off places, but we scarcely won again the rest of that season.

Who is the best player you've seen playing in a Town match?
I'm dreadfully one-eyed when I watch Town, but when we lost 4-2 to Portsmouth in 2001 I was as happy as I've ever been after a defeat: we'd made a good start to the season and it had been a good game, and Robert Prosinecki had been fantastic for them in the second half.

While I was waiting for the train home, I even thought of going over to a group of Pompey fans to congratulate them. Then I overheard one of them saying he wanted to see the replay of Mike Jeffrey's brilliant chip for one of our goals, not because it was such a good finish but because he thought he was probably offside. That even though they'd won. As I say, I'm dreadfully one-eyed, but at least I'm not a completely wooden-headed shitlark who'd be better off staying home and watching for score updates.

Have you ever watched Town from the wrong end? How did you survive?
I didn't watch Town at all between 1980 and 1987 after the relatives we used to visit in Cleethorpes had all died and I went off to university. My first game back was at Aldershot. I misread the signs pointing away fans to the far end of the ground and went to stand in a paddock along the touchline. I did notice there were a lot of home supporters there but just thought maybe their attitude to segregation was pretty relaxed. I didn't restrain myself when we went one up but then was embarrassed when someone asked me who'd scored and I couldn't identify any Town players. After that they decided I was harmless. It perhaps helped that we ended up losing 3-2.

If you could turn back time?
I'm spending less time on Cod Almighty now as I'm researching and writing a book on Town between 1919 and 1939 - a lot of the time it is an attempt to dream myself back into Blundell Park when we were ascending to the top flight. On 3 October 1931, we beat the League champions Arsenal 3-1 with a team packed full of players who have become favourites of mine: Bestall and Glover obviously, but also Tommy Read, Charlie Wilson, Joe Cooper, and Billy Marshall. That would have been a great day to be there.

The following week we lost at home to Chelsea, who were bottom of the table, and we ended up going down that season. Even when we were good, we were Town.