Around the grounds: Boreham Wood

In the first of an occasional series, Mark reviews the architectural delights and disappointments of Boreham Wood's Meadow Park

In this series, I'll be seeking out ground features, shared experiences and quirky details. I'm not a fan of those identikit, slab-sided, donut grounds of the 1990s generally located on the outskirts: think Derby County, Middlesbrough, Doncaster Rovers and most especially Scunthorpe United. They are usually where the action isn't, detached, soulless and adding very little to the match day experience. We have much to be proud of with our home, full of history, personality and sub-standard toilets. There's a lot to be said for asymmetry, a distant view and a ground positioned at the heart of it's community.

I could have chosen a more evocative club and ground than Boreham Wood's Meadow Park to begin, but here goes. The task was made more enjoyable as my match buddy for the day was my pal Derek, who also happens to be an internationally-renowned stadium architect and current chair of the Sports Grounds Safety Authority.

Ideas above their station: pop-up sprinklers and Recaro seats

The first thing to notice on entering the stadium was the quality of the pitch. Derek reliably informed me that it was one of those new fangled Desso pitches, mostly grass, partly plastic fibres, and about "£1 million squire, if you please". Which immediately begged the question why would a team who use the pitch mostly for standing and taking off from require such a luxury. A clue was in the name of the stand opposite, the "North Bank". This is the home of Arsenal Women FC. Other ideas above their station features included Recaro seats in the dug-outs and pop-up sprinklers. Actually, we've got those, so just the posh sporty seats then.

The away end was good old fashioned terracing, quite "on trend" according to Derek. If the home end is the North Bank then surely this must be the Clock End and I did find the clock part-way through the second half. It's a digital version on the scoreboard positioned with no thought of benefit to the away fans at all. 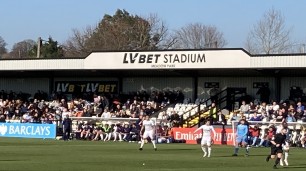 From our lofty position at the back of the terrace what could we see: three identikit stands with cantilevered roofs (no columns, unlike our much-loved Main Stand), muted grey coloured cladding everywhere with fancy black seams. All of the stands had clear and uninspiring text emblazoned centrally on the fascia below a particularly unimpressive feature, which after much thought and discussion we decided was a stunted gable. We believe its main function was to allow you to get your bearings and act as a reference point for the halfway line or behind the goal when your neck had become too strained and you needed to find the horizon again after viewing the sky, and the distant sight of the ball flirting with the international space station. Either that or they ran out of money before they could do the pointy bit of the gable. 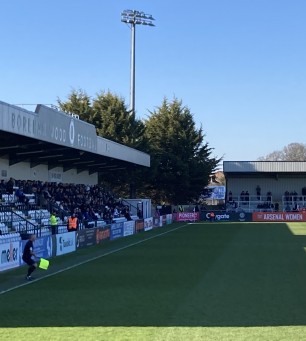 I do like stadiums where your position affords a view outside of the ground as well as onto the pitch (I'm older now and have graduated to the rear of the Findus/Smiths/Youngs Stand for that very reason). Even better is a view of back gardens and trees, and even better still is where those trees seem to be actually in the ground. It's a reminder that professional football at this level and all of the froth and pretentious nonsense associated with it (Recaro seats. Really) is not that far removed from the parks pitch. Such was the case on Saturday when two enormous trees had barged their way in front of the floodlight pylon and filled the north-west open corner.

Other bits to note:

The highlight of the day was an ice cream van outside the away turnstiles doing pretty good business, a nice touch on a beautiful spring day. 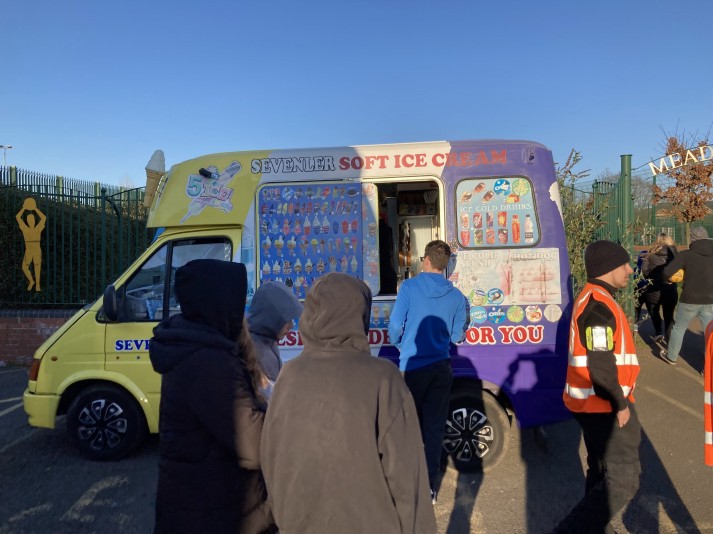