Alistair first wrote for Cod Almighty in 2003. He was a factory worker who wrote poems and a couple of features. Mostly, he wanted to be able to write well and Town gave him the focus to practise. These days he's a teacher and has become a competent writer. Cod Almighty and its teams of contributors and editors have played no small part in that. 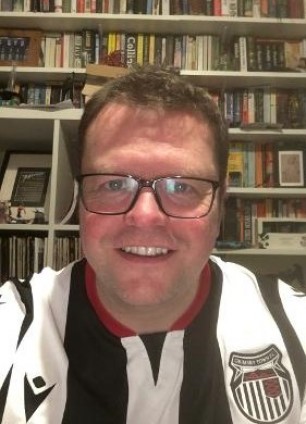 I was late to football. Never enjoyed watching it on the telly as a kid. My brother was the sports nut. Our granddad would take him to Blundell Park. Granddad had a complimentary season ticket for the Main Stand; his brother, our great uncle, was Tom Wilkinson, life president of the club. My brother got to see the fabled 83/84 season. I was too busy with Star Wars figures and my BMX.

My dad would take us a couple of times a season and I always enjoyed it. Live football was different to what was served up on the telly. I loved to hear the old men groan and complain, 40-a-day throats rumbling to life to make demands. So many men were so quiet when I was a kid. Dads and granddads and uncles in houses full of the chatter of women. Blundell Park was the only place I would hear their voices. And they were so unhappy. It was great. Old toads, fat, flat mouths flapping and snapping at flies. Little dramas everywhere, and those fleeting moments of joy, of rising to their feet, arms in the air, smoke-filled grunts and shouts of celebration, were a distraction to the main plots. I wanted to be a part of it and that meant letting the football in.

And then, as a 15-year old, I found the back of the Pontoon, and it was young men, voices not yet worn out by cigarettes and years of shift work, who turned my head, made me want to be a part of something. So many of us from so many different streets and all brought together by this wonderful thing. Why am I a Town fan? In short, what else would I be?

Where was your first seat/standing position and where do you like to sit now?
Back of the Pontoon to the left of the goal. I stood there for singing. In my mid-twenties when the seats came in I moved forward a few rows, happier to watch and let the younger ones sing. Once I had my own kids I moved to the right of the goal, a little further away from the choicer outbursts and onto the back row, giving me a standing option if I want it.

What's your favourite Town kit?
Lotto, 1996/97 to two thirds of the way through 97/98. Clean lines and a classy collar. Memories of Jack Lester, a monochrome blade cutting through all, are still some of my most vivid.

Six degrees of separation
As mentioned above, great uncle Tom Wilkinson was a life president. My wife's grandma on her dad's side had Drinkell as her maiden name. My father-in-law is convinced there's a connection.

How did you get involved with CA?
For years I'd fancied myself a writer without ever actually writing anything. In 2003 I got my first computer, had my first internet experiences and started typing up the notebooks I'd kept in my pockets at work. It was poetry. They were awful poems, but they got me using language and trying to construct things that would express something. Lots of 'things' that had no real shape or purpose.

Town became a focus and I knew Pete Green, so I emailed a poem to him, hoping he might like it and hoping he would put it on the site. He did. Or he was grateful for content. Or both, it doesn't matter. Soon I was writing one a week, rhyming reports of games and shenanigans. I can't remember how long I wrote them for but I must've done over a hundred. Writing for Cod Almighty got me writing, sent me to college, got me out of the factories.

I did other features: a Bonetti, a Birtles, a false-start series on trying to get kids involved with the club, rough guides and player profiles. I've done a few diaries as A46 Diary. I've tried to keep my hand in by doing at least one poem a season. The latest one is If I were King of Blundell Park and I did a farewell to Fenty last season. We did a couple of live events that I really enjoyed and I've carried that on by attending open-mic nights in Grimsby and Hull. I still fancy myself a writer and it's Cod Almighty that kept that fancy alive.

Favourite John Moore or Rolyism?
Anything that gets John's aaaaa going, so anything where he says it's maaaarvelous. And Roly's "You won't see a better goal anywhere" against Huddersfield.

What or who did you get wrong?
I saw Tony Crane away at Bristol City not long after he signed for us. He was immense that day – we lost 1-0 in the 90th. I wrote a player profile for CA telling all how fabulous he was going to be and how he was going to be the man to lead us back to whatever division it was we'd been relegated from.

And, yes, I did moan about Jones the Stick in his first few games, but we've rarely seen a player turn opinion quite so drastically.

Which player do you love and why?
Now or in the past? McAtee and Clifton now for their energy and excitement.
Then: Groves for his constant capability. In 1997 it was his re-signing that kick-started it all and rescued my belief that Town could again play football.

Which former player do you loathe and why?
My memory is too bad for this one. I mostly forget players who I don't like and if they're really awful, Vance-Warner-awful or that-keeper-Tommy-someone-awful, then I try not to think about them. Even then I couldn't say that I've ever loathed a Town player.

Where's the oddest place you've bumped into a fellow Town fan?
A comic convention in Huddersfield. I had rented a stall and was selling my novels. A chap stopped to browse. He was dressed head to toe in black and white. We were surrounded by people dressed as animé characters, Ewoks and Hogwarts students, and here was a Town fan, looking equally dressed up. "Up the Mariners," I said and showed him the Town badge screen saver on my phone. He smiled, we chatted about Town.

He didn't buy a book.

Favourite Tony Butcherisms from the million words of woe
I was once able to bask in the glow of the Butcher's apron as we were both interviewed for Sky TV on our return to the Football League. He said many witticisms which I am still too star struck to remember.

Which Town player have you found yourself near and where?
This happens a lot, usually in supermarkets or Freshney Place. Since having kids I'm better at saying hello – I was always too shy for much more than a nod and a stupid grin.

We collared McKeown in Tesco, Pearson in Tesco and Dembele on St Peter's Ave. We saw Groves in Harvey Nichols in Leeds, Pearson again on the Fitties, Lever in the pub, Macca and Daryl Clare on Osborne street, a very friendly Anthony Elding outside M&S who seemed genuinely pleased to be recognised and chatted to us for ages about the joys of going to Blundell Park.

My favourite memory is Stacy Caldicot. I saw him in Sainsbury's years after he stopped playing for us. I kept seeing him all around the shop, kept staring, trying to think where I knew him from. He noticed, didn't seem to mind, even nodded and said hello. Finally, at the till, I saw him again in the queue behind me. "You're Stacy Caldicot," I said. "I am," he replied and smiled. We chatted for a few moments and he was lovely.

Have you ever exchanged words with Alan Buckley – or even with a lesser manager?
Jolley posed for a photo on a Blundell Park open day. An aide came and spoke to him about closing time. He said to extend it if it kept the fans happy.

Are you a forgiving soul? What is the longest Town-related grudge you hold.
That bad memory again. The football under Nicky Law is still something I have nightmares about but, on the whole, I take the view that we're never going to run out of bad players, bad management and bad decisions. Let the grudges go; there's plenty to moan about in the present.

Who is the best player you've seen playing in a Town match?
Prosinecki. More talent in that languid body than anything else I've seen. Clearly didn't want to be at Portsmouth and certainly didn't want be at Blundell Park but was so elevated, so transcendent that he may as well have been playing the ball on the Findus roof.

Have you infected anyone with the Town? How are they today?
My children. They're mostly okay as they grew up during the first non-league stint and so are inured to all the nostalgia that infects the rest of us.

When we find ourselves in times of trouble do you have you a secret second team that you turn to?
No. I've tried to follow Liverpool as my brother, my middle child and father-in-law are firm fans, but I can't summon the energy. I still much prefer live football to the telly. I barely even watch Match of the Day anymore.

Where have you been the most miserable when following Town?
An individual game: Hillsborough, FA Cup, lost 7-1, Oster gets the one after a glorious pass from Mendonca. I left early. That night in the pub my girlfriend, annoyed at how quiet I'd been, realised before I did that I was crying into my beer.

A period: Neil Woods' time as manager. That 20-odd game run without a win, defeat to Bath City in the cup, Fenty giving him the job full-time. The team was awful, the non-league was awful and all we had was Fenty banging on about a new stadium. 2010 was when we knew for certain that no one at the club knew what they were doing when it came to football but knew exactly what they were doing when it came to manipulating the club for personal gain.

And what's the high point?
Away at Burnley for the second leg of the northern section of the Autowindscreen semi-final. We won 2-1. We were riding high in the third division and going to Wembley for the first time. Drove back to Grimsby, horns honking all the way, more horns on the streets of the town, up Gullies, back to a mate's for more drinks, the whole night painted in black and white and visions of a perfect future.

If you could turn back time?
Sacking Buckley in his second spell? August 2000. Hadn't we just earned a draw at Portsmouth? Did we hit the bar in the same game? It would be 11 years before we appointed another competent manager.