Jase, 51, has been a Town fan since the late 1970s, the only one in his family trying to fly the flag for the home town club. He had a sabbatical for a couple of years in protest at the last chairman - whose name he still can’t bring himself to say. His love of football has introduced him to many members of Cod Almighty, and sympathy to Mark Dillerstone (BlackandWhiteBarmy) who's had to endure sitting next to him for nigh on 20 years.

On 15 April Jase will be walking from Hull City's ground to Blundell Park to raise money for MacMillan Cancer Support in memory of his mother who died last year. You can donate here. 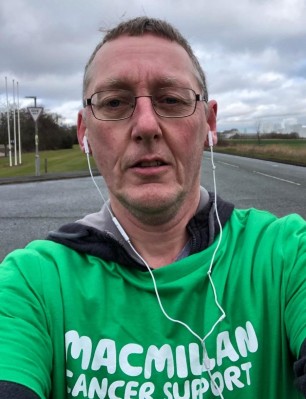 I was brought up in a sports-orientated family, so did sport from an early age, but my parents never supported Town. I went with friends from various sporting clubs, from aged seven or eight - and once I went that was it.

Where was your first seat/standing position and where do you like to sit now?
Stood on a milk crate at the front of Barratt Stand. I presently sit in the Pontoon with a great view of a metal post.

What's your favourite Town kit?
This will go against the grain, but I liked the mainly white shirt with black pin stripes.

How did you get involved with CA?
I got to know Tony, Sue, Mark, Pete, Pat and Peter from meeting up before games in the Rutland, and was asked to contribute a couple of times

Did you ever call Clubcall? If so, where from?
Err yes...from a ship in the Adriatic to find out the score v Luton in the FA Cup...7-0 or something. I called because I heard the score on BBC World Service and thought "That can't be right!" Cost me a small fortune.

Are you bothered which division Town are in?
Not overly, I would like to return to football league status but in all honesty there's little difference between the Conference Premier and the fourth division - and at least the coverage is decent on BT Sport.

What or who did you get wrong?
Most recently Ian Holloway…I even went to the pub on the day he was appointed. Didn't take long to work him out after, though.

Where's the oddest place you've bumped into a fellow Town fan?
In a warehouse in Slough, and on a Royal Navy ship in the Adriatic.

Who has had the most fantastical hair you've seen at a Town game?
Pete Green.

Steve Meek, infamously, once helped John Shelton Fenty erect a gazebo. Have you got a John Fenty moment?
He came to our local business (sporting) a decade or more ago and his advice was "make sure the windows are clean".

Which Town player have you found yourself near and where?
I used to live next door to Rod Fletcher, I did some work with Jamie Forrester, and Graham Rodger used to use facilities at Playsport with his SET group.

Have you ever exchanged words with Alan Buckley – or even with a lesser manager?
I've served Arthur Mann in a shop, if that counts – he came in for a paper and fags most mornings.

Favourite Tony Butcherisms from the million words of woe
Love the unique match reports/style. On a match day if the ref hasn't heard foul throw 20 times or the corner taker "elevation" every time, then there's something wrong.

Have you ever watched Town from the wrong end? How did you survive?
Leeds away in the FA Cup. I was in the Royal Navy and away so couldn't get a ticket in the Town end, so watched from the Leeds end behind the other goal. I didn't speak for the whole game. There wasn't anything to celebrate, thankfully.

Who ate all the pies?
Mark Dillerstone.

Where have you been the most miserable when following Town?
Tranmere when relegated. I don't know why, but it just hit hard and has stuck.

And what's the high point?
Middlesbrough away in the FA Cup in 1989. My favourite away day ever.

Have you infected anyone with the Town? How are they today?
I tried. As some will know, I raised Loz as a single dad and took her to games from aged two. She had had enough by aged five or six. We did go to Wembley later against MK Dons, but she now mocks me for my support.