Bill Meek works outside, so gets wet a lot. He proudly believes he wrote the most read diary of all time, whether or not that's actually true. Likes: fluffy clouds, springtime, flowers, babies. Dislikes: Leeds and MK Dons.

Why are you a Town fan?
There's been a member of my family at almost every home game since the birth of the club. My dad was born during the game at which Town had their biggest home attendance and my grandad missed the birth because he was at the footy. On Saturdays I sometimes try to go somewhere else but I lose control of my legs and they just take me to BP in an act of genetic disobedience. 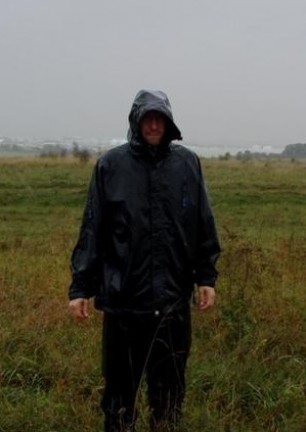 When we find ourselves in times of trouble do you have you a secret second team that you turn to?
Absolutely not. That’s crazy talk perpetuated by the kind of person who claps away fans.

Where was your first seat/standing position and where do you sit now?
I've had season tickets in five different stands at Blundell Park. The view from the Upper is the best in the whole of football but it's no good for having a word with the ref after we've been cheated. I now sit about five yards from where I started in 1974, at the Osmond end of the Main, where your legs can catch a bit of sun in winter. There's a gap in the poles there so it's a better view than you think. It's apparently a 'family area' now, so I took it on myself to improve some children's vocabularies when MK Dons fans were in the adjacent corner.

New ground or redevelopment of Blundell Park?
It would be lovely to stay at Blundell Park but we'd have to find a clever way of doubling the capacity or we'd be locked into the small time for ever more. The Findus would have to extend to the whole length of the pitch at the very least. I could accept a new ground on the docks if it was a crazy iconic asymmetric design with a panoramic view of Spurn and floodlights shaped like fish. If it was a copy of the Keepmoat I think my motivation might enter a coma.

What's your favourite Town kit?
It would have to be something quite recent to get all the hot pants and baggy blouse mistakes out of the way. I quite liked the first non-League kit 2010-11 – reassuringly simple and didn't make the red socks look too incongruous. I look forward to a time when we have the self-confidence and classiness to leave the sponsor's logo off the shirt (it really makes a mess of the stripes). I suppose at least we've never been sponsored by Pooh (AC Milan), Nobo (Brighton), Virgin (Palace) or Black Death (Scarborough), so maybe we should be grateful for small mercies. Or Flamingo Land (Hull City).

Socks: Red, White or Black?
Red. They're a bit tinpot but I like to think of them as a self-confident and sophisticated piece of trolling.

How many Town mugs have you got?
Three, including one very weird one with OFFSIDE, GOAL and FREE KICK written on it, which even more weirdly was found in a charity shop in Hull. I'm thinking it could be rare – maybe I should contact Cash in the Attic, or We Buy Any Mug?

Which player do you love and why?
"Player"? Seriously? Brolly, Kev Moore, Joe Waters, Fordy, Dave Boylen, Ivano, Big Keith, Macca, Futch, Cockers, Grovesey, Dizza, (deep breath) Clive, Woodsy, Reesy, Liam H, Omar, Podge, 'Arry 'Arry 'Arry Wainman (how long have you got?). If I have to pick one, it would have to be Ivano. A player of supreme quality and unfeasible cult status who gave us the 'what might have been' moment to scar our souls forever, whose painfully short stay just added to the agonising romance of it all. His stay feels like a dream that could never really happen.

Have you ever exchanged words with Alan Buckley?
Wikipedia says that Alan Buckley is "the club's most successful manager". Well that depends on how you measure it, doesn't it. Even in my lifetime I think that's monstrously hard on George Kerr, and I only think that because I can't remember Frank Womack. Actually, Bill Shankly is our most successful manager (yes I know, I know). This, of course, is the common cognitive bias towards the recent that we see in anything to do with lists.

But okay, the question was about Sir Alan and I'd never detract from the wealth of joy he's brought us, obviously. Sadly I've never met the great man, although I saw him and Mrs B doing some shopping in M&S the other day and I managed to resist the temptation to approach him in the kind of impromptu hero worship that seldom ends well. I remember seeing Alan play against us for Walsall more than once, and he was always very tricky on the wing. It was before names on shirts, so you'd have to get the programme out and say "who is that flippin' number seven?"

Do you care about the national team?
I think you have to, don't you, although both players and fans of England can sometimes make you crumple with humiliation. I'm so glad that the horrible Terry, Lampard, Gerrard team has finally buggered off, with that diseased mentality that had disappointment baked in. Even the current fluffy pup Gen Z England multi-millionaires feel a bit like the 'anti-Town', and I don't feel quite like the person I really am when I'm cheering them on. And Jack Grealish's hair, ffs. But when the ball goes in off Kane's arse in the World Cup Semi am I going mental getting soaked in flying beer and singing Freed from Desire in the Coach House? Course I am.

Where's the oddest place you've bumped into a fellow Town fan?
On top of the Palace in Monte Carlo (Hi Andy).

Have you ever walked around Chapman's Pond?
I didn't know it was possible to get all the way round. Everybody knows it's bottomless so don't fall in. I think I remember a public information film about it in the seventies with Donald Pleasence.

Have you been up or inside the Dock Tower?
Yes. You go up a very tall staircase inside a very tight cage. The walls inside are supported by kind of metal cross strut things. The last bit before you emerge into daylight is quite scary. It was very windy up on the parapet thing and while you can see a long way it's hard to find anything really pretty to look at. Pyewipe looks especially dystopian but the waters of the Humber are quite calming and you can see beyond the town to the Wolds behind, and surprisingly far down the coast. Blundell Park is disappointingly distant and two thirds hidden by that blue and white Yearsley carbuncle.

Are you a forgiving soul? What is the longest Town-related grudge you hold.
Are you kidding - Leeds, August Bank Holiday Monday 1982 (the day the Findus opened and Leeds's first game in the second division after relegation). Who could forget their institutionally charmless fans undertaking a pre-planned and choreographed rampage down the seafront smashing everything in sight. There was fighting in every street leading to the ground (I think there was a stabbing?), and I remember walking down Imperial Avenue towards the Pontoon and a bottle flew past my head and through a front window. Their fans were in all four stands, which became apparent when they took the lead. In danger of becoming the worst football day of all time, thankfully the divine intervened and we equalised.

When I finally moved away from Grimsby I went to live in – Leeds. A couple of times I decided to stroll down to watch some football at Elland Road on a Saturday afternoon. On the first I realised that the National Front had adopted Leeds because they played in all white, and on the second I heard grown men openly plotting to smash up Bournemouth like they'd smashed up Cleethorpes, which they duly did on May 5 1990.

I know that Leeds have had to put up with a lot in the last couple of decades, but for me they've never suffered quite enough.

Where have you been the most miserable when following Town?
Five minutes into the return coach journey from Portsmouth after losing 4-0, trying to find my pissed mate's vomited-out dental plate in his sick bag. It was November 5th just as it got dark and a backdrop of fireworks was a fitting accompaniment to a moment of superlative bleakness and, believe me, that's a high bar.

And what's the high point?
Kevin Kilmore's equaliser against Leeds, August Bank Holiday Monday 1982. Some feeling went into that celebration I can tell you. And Wilkie at Everton, and Jevons of course, which I still watch occasionally to cheer myself up. And Nathan at Wembley obviously, for all the good it did us. Actually, that 2016 team was very far from the best, but it's still the one for which we have the most heartfelt, involuntary affection, which is an amazing thing when you think about it.

Are you bothered which division Town are in?
Yes - two reasons: 1) because higher division equals better football; and 2) because of the simple equation: you come from Grimsby + Grimsby Town are shit = you're shit.

The longer way of saying the same thing is because our town has pretty much nothing except its football team. I find most sports to be a load of pointless narcissistic bollocks but football is the exception because the actual players come a distant second in importance to the municipal identity of the fans. If enough people tell you that the home town which formed you is a shithole (and plenty do), then the one and only way of sticking your apparently shit identity right up someone's pompous arse is to beat their lot at football. The league tables put people's identities in an actual order – think on that when someone mentions Skint.

So yes, while I reluctantly accept that we're not going to stroll the World Club Championship any time soon, I'd still like to see us at a level where we can rebut lazy, casual, sniffy, fish-and-Yorkshire related, dump-with-a-death-wish drag-downs of our town without any incentive or responsibility to know better. This would require our club, which of course constitutes the entire PR department for our place of birth, to be considerably higher than they are now.