Miles Moss is a Manchester-based electrician and controls engineer. He contributed lots of general nonsense to Cod Almighty in the early days, but is now more of a reader.

Why are you a Town fan?
I can thank my dad and my late Uncle Pete (who played for Town Reserves in the 1960s) for that. We were having a kick-about in the garden of my nana's Cleethorpes house when they asked who I supported. "Man U" I replied. I must have heard the name in the Old Clee playground, but when Pete asked, I couldn't even tell him what the 'U' stood for. Clearly it was time I was educated, so Dad took me to Blundell Park (the 1979 league cup win over Everton – what an introduction!), and I've never looked back. 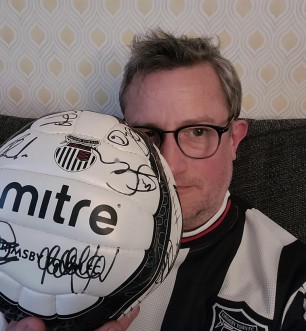 Where was your first seat/standing position and where do you like to sit now?
When my dad took us in the late 70s/early 80s, we'd stand in the Barrett's/Pontoon corner. I was a short kid; I imagine I saw more of the backs of people's coats than the match. I've seen plenty of matches from the Pontoon and the Main Stand, but my first choice these days would be the Upper Young's as I can follow the game better from there, and of course pick out interesting ships on the Humber.

New ground or redevelopment of Blundell Park?
I love Blundell Park's location; the view of the Dock Tower and ships on the Humber, and I wouldn't want to lose something with so much local character. I never understood the support behind the Great Coates or Peakes Parkway projects, charmless and soulless retail park boxes. If having a big car park is the first thing on your list, go and spend your Saturdays at Meadowhall instead. A new stadium would be fine, but its design, location and feel will have to say something about the local area and the history of the town and the club, and be surrounded and served by local businesses, not plonked out of town, have to be driven to, with overpriced refreshments only available from the usual tedious fast food chains. A football ground is a living museum, not a by-product of a bloody Nando's. The new owners, thankfully, understand this.

How did you get involved with CA?
The details are a bit vague if I'm honest, but I do remember meeting up with the others at various matches in the late 90s via the original Electronic Fishcake messageboard. We subsequently stayed in touch (before the days of social media, imagine that) via reply-to-all emails, sending hundreds of messages every day from our crap-office-job desks - sometimes Town-related, sometimes just utter nonsense. This turned out to be great practice for when the website was born.

Which Cod Almighty feature would you like to see return?
Sepp Natter, where each click would generate a random, stupid football rule. I'm wondering if the National League executives have already stumbled across this in the archives.

Which Town player have you found yourself near and where?
February 14th 2004, Town vs Brighton, Si Wilson's daughter on her first birthday, and my son, four days before his, were the mascots. As they were so young, we got to carry them onto the pitch and on the stadium tour. John McDermott wasn't playing that day but we bumped into him behind the scenes. He was my favourite player, and I was so starstruck I mis-spelled my own son's name for Macca to write it in the autograph book. He looked at me like I was an idiot. He wasn't wrong.

Have you ever exchanged words with Alan Buckley – or even with a lesser manager?
Under the guise of being a journalistic team, Si Wilson blagged a few of us in to a pre-season friendly at Halifax, and we all stood around after the match while Si interviewed Russell Slade. I kind of drifted off, but then regained focus when I heard the opportunity for an obvious gag, chipping in with my only contribution to this interview. After a short silence and everyone staring at me, it became apparent that Slade had already made this same gag seconds earlier. Keep me away from Town managers.

What's your favourite Town kit?
Chocolate and blue quarters? No. That first visit to Wembley in 1998 will always be a special memory. There may be classier designs, but every time I see that Dixons round-collared strip in my wardrobe I'm reminded of that day.

Which player do you love and why?
It would be very easy to choose a 20-goal striker or creative midfielder, but as we've recently seen, what goes on behind the scenes is just as important as the matchday 90 minutes. So I'm choosing Shauny Pearson, that man right there… Total commitment on and off the pitch, he understands what it means to be a pro footballer, and he's obviously passing this on to the younger players. He's exactly the sort of player you want at a club.

Did you ever see Glen Downey?
He actually existed? I thought he was like Robin Hood or Atlantis or something.

Where's the oddest place you've bumped into a fellow Town fan?
Manchester isn't a particularly unusual place, but in another life I was a drummer in an indie band; at one gig there I decided to wear my Town top - something cool and unusual that nobody else would recognise. During the soundcheck, a member of the band we were sharing the bill with came onto stage to ask if I was taking the piss. He was, of course, another Town fan. They're everywhere.

Where's the wettest you've been watching a Town game?
I've been to a couple of matches which have been called off at half time due to torrential downpours (Rochdale, I think), but was fortunately in a covered stand. Coldest? An open corner of temporary seating at Maine Road in December. Most sunburned? The Craven Cottage play-off semi in 1998.

Have you ever watched Town from the wrong end? How did you survive?
A Norwich-fan friend from work and I did a cultural exchange in the 2001/02 season. He sat in the Pontoon with me, and I sat in the home end at Carrow Road. As Terry Cooke's late equaliser went in, it was obvious I was a Town fan, but nobody was really bothered, for the whole 90 minutes they had seemed more intent on moaning about their own team, odd bunch.

Where have you been the most miserable when following Town?
I think I've always enjoyed watching Town away. Even when the weather has been awful, or a hapless Town lose 6-0, there have always been fellow Town fans to share the experience, and the away support has an excellent line in gallows humour. However, those end-of-season matches when you realise you're on a sinking ship to relegation weren’t much fun.

Who has had the most fantastical hair you've seen at a Town game?
I was struggling to answer this until Town's recent eliminator at Notts County, where Kyle Cameron's hair was all sorts of bizarre.

Have you been up or inside the Dock Tower?
I have, all the way to the top - on one of those charity events, maybe 30 years ago. I remember the view being fantastic, the staircase inside absolutely terrifying.

Favourite Tony Butcherisms from the million words of woe?
Crazily descriptive yet footballingly incisive, I've always loved the unique flavour of Tony's match reports, picking out the pop lyrics, prog rock references, and obscure trivia easter eggs makes me feel like I'm winning a round of Only Connect. And from real-life exposure I can't see a foul throw without hearing Tony's voice in my mind's ear.

Have you infected anyone with the Town? How are they today?
I've taken my wife, children, and several friends to Town matches. None of them are fully-signed-up Mariners yet, but it's amazing how many messages I'll get from friends and workmates after a good Grimsby result. Also, I was delighted to hear my 19-year old son, born and bred in Manchester, say 'we' when referring to Town quite a few times at the play-off final.

When we find ourselves in times of trouble do you have you a secret second team that you turn to?
Trafford FC's ground is a 15-minute walk from our house, and a great place to meet up with Pat Bell for a pint, a chat about Town, and a decent level of football.