Jason Stockwood went to school in Waltham, worked down the docks and waited at the Winter Gardens. He went away to learn things and do things, and now he's back home. Businessman, academic, a Town fan through and through and our chairman with a plan. 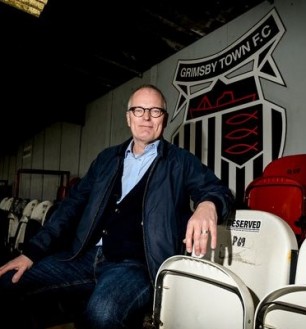 Because I am from Grimsby. It's part of my identity and in my blood. One of the few constants in an ever-changing universe.

Where was your first seat/standing position and where do you like to sit now?
Stood in the Lower Findus or to be honest wherever the person we tagged along with would take us. It was usually my mate Rich Parr's dad, Bob. I am eternally grateful for him taking me.

I've sat in the Upper Findus with my brother and his mates for years. The seats we sit in now are only a few rows away from there.

Have you infected anyone with the Town? How are they today?
I am on a personal mission to recruit GTFC fans wherever I go now. A number of my business associates and their kids now have GTFC shirts and training wear. We have new fans in Altrincham, Stockport, Balham and Atlanta now.

When did you first write anything about Town?
As CEO I used to write a weekly update to the business and would often squeeze in a football metaphor or GTFC analogy. My first piece of 'real' writing was my CA article to announce us taking on the shareholding.

Which Cod Almighty feature would you like to see return?
I love the Grimmo Dictionary and Famous Grimsby Peeps. I've sent so many links of those sections to non-Grimbarians as it perfectly explains where I am from.

Which Town player/manager have you found yourself near and where?
Growing up, my brother and Gary Kerr (George's son) were mates and lived near us. George (unknowingly) took me to see Smokey and the Bandit in the late 70s when I tagged along on what would now be called a play date. Not sure whether we wanted to see it or he did. Either way, I remember his kindness and Burt Reynolds winking to the camera.

In 1989 I got to train for two weeks with the first team while I was on trial. I jumped on Gary Birtles' back during a warm-up exercise. I think I held on to him a bit too long and too affectionately as he asked me to get off and wouldn't make eye contact with me afterwards. Alan Buckley gave me some robust feedback on the same day for overhitting a cross. We didn't speak again for 32 years.

Have you ever played football with, or against, any Town player?
See above - I got to train with some of my heroes for a couple of weeks. I played for the district and county as a kid. The best player I ever played with at that level was Chris Grocock, technically brilliant and intelligent as well. It's been great to reconnect with Chris and the brilliant work he does as Chair of GTSET.

Chris Hargreaves and Mark Lever were in those teams as well.

What's your favourite Town kit?
The MyEnergi home kit 22/23. It symbolises so much about where we are heading.

Where's the oddest place you've bumped into a fellow Town fan?
Not a fan, but I was in Mexico City in the 90s and saw a Town shirt in a sports shop. I took a picture but when I got home I realised the close-up shot just made me look like I was outside Harry Wainman's on Fremo.

Steve Meek, infamously, once helped John Shelton Fenty erect a gazebo. Have you got a John Fenty moment?
No comment

Who ate all the pies?
Definitely Paul Taplin. He even brings his own to McMenemys!

Which player do you love and why?
Any that give 100% effort and understand that they represent all fans spanning back 144 years every time they pull on the shirt.

Who is the best player you've seen playing in a Town match?
Gary Birtles or Joe Waters. There are a few in this current vintage as well.

Have you ever exchanged words with Alan Buckley?
It has been a pleasure to get to know Alan over the last year. Alan has been incredibly generous with his time and advice. When Andrew and I came in last year, for our first meeting I met Alan at Pennell's for a cup of tea. I asked if he wanted a biscuit or piece of cake and he said "No, thanks." That's how we roll.

Six degrees of separation: any friends and family connections giving you an 'in'…or not
Paul Wilkinson's sister used to cut my hair as a kid.

Are you bothered which division Town are in?
Absolutely.

Where have you been the most miserable when following Town?
I don't dwell much on the past as a general rule but Macclesfield away on Boxing Day 2019 sticks out. I persuaded 15 people including my wife, my kids and her family to come along and we'd make a day of it. We did - a shit day. It was a depressing 1-1 in weather-exposed seats in a ground that should have been condemned. Most of our group left at half time. I should have gone with them.

If you could turn back time?
Never. Onwards!