Essential history for younger fans, a wonderful evocation for those who were there. Ron enjoys reliving Town's 1971-72 championship campaign 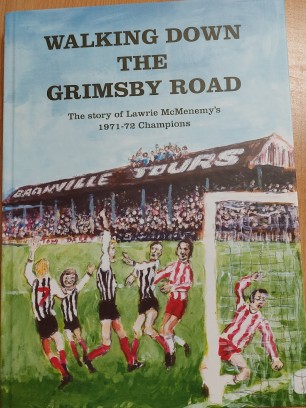 You know you are getting old when events from a bygone era are contained in your own memory banks. Walking down the Grimsby Road: the story of Lawrie McMenemy's 1971-72 champions, Rob McIlveen's excellent new hardback book, brings these memories vividly back to life. To younger Grimsby fans the book will be an interesting piece of history regarding a season which has entered Mariners' folklore. But to those old enough to have experienced that season this wonderfully evocative book is a joy to behold.

The book starts with a review of the four seasons prior to 1971-72. Not only interesting background, it sets the scene for the state of the club prior to McMenemy's arrival. Within this context his achievements are even more remarkable. With a very limited budget he transformed a team that had been bouncing around the bottom reaches of the Fourth Division, and which had had to apply for re-election in 1969, into champions.

The book follows a similar structure to Rob's excellent Champions, on 1979-80, with match reports for each game of the season, with results from other games and league tables so you can follow the Mariners downs and ups through the campaign. An added bonus is the detailed player descriptions, inserted between the match reports at points of significance. For example Stuart Gray's profile appears after the Norwich city game when he scored his first goal for the club. It's a very nice touch.

The home attendance figures are jaw dropping by modern standards. Not just the two games which attracted more than 22,000 each to Blundell Park but other games such as the 15,564 gate for the visit of Lincoln city, the 16,657 gate for the game against Reading and the 13,414 gate against Aldershot. Heady days indeed.

There are plenty of screenshots of adverts from the match day programmes. By modern standards these look basic, as if they have been put together by a 12-year-old using his John Bull printing set for the first time. There are notes of congratulation and encouragement from some extremely colourful local characters such as the legendary landlord of the Clee Park pub Jock McRoberts, and night club owner Bonnie Newton. Norris the Rubber Man also gets a mention and to this day I still don't know whether that was a real person or not. The mind boggles.

There is a generous supply of photographs throughout the book, including those from matches, team photographs, and other fan-related shots including an iconic shot of fans watching the final game of the season from the top of the Barrett Stand roof. There is also a shot of Dick Broadbent running naked through his factory after losing his bet at the start of the season that Town would not be promoted. People had long memories in 1972 so he was forced to make good on his wager.

It was fantastic to be transported back to the days when I used to head into the Barrett Stand to watch Boylen, Tees, Brace, Lewis, Worthington and the rest ply their trade. The team had such swagger and scored for fun

Some things I had no recollection of. For example Scunthorpe United fans breaking into the ground a few days before a match and spraying the Pontoon Stand with graffiti. Shocking behavior. All I can say is that they are suffering a big dose of karma this season.

There is a splendid end section with reproductions of dozens of programme front covers from the season. But of course the real joy of the book is in reliving the games themselves. Many of them were truly memorable and it was fantastic to be transported back to the days when I used to head into the Barrett Stand to watch Boylen, Tees, Brace, Lewis, Worthington and the rest ply their trade. It's a real trip down memory lane and enables one to relive what many of those lucky enough to experience it will still regard as the greatest of all seasons. The team had such swagger and scored for fun.

The player stats make interesting reading. Dave Worthington and Stuart Gray were both ever present. But more remarkable was the fact that Matt Tees, the wafer-thin forward who looked as if he would be carried away by a strong gust of wind, managed to play 43 league games. This is truly remarkable because of the agricultural nature of typical Division Four tackles in the 1970s. That Tees withstood that treatment and banged in 29 goals is pretty extraordinary. But then the whole team was pretty extraordinary. For sheer excitement I don't think I have witnessed a season like it, although last season's play-off campaign came pretty close.

So to those interested in the history of Grimsby Town this is a great addition to your library. But for those who were there the time it is an absolute must. It was a fantastic time to be walking down the Grimsby Road.

Walking down the Grimsby Road: the story of Lawrie McMenemy's 1971-72 champions by Rob McIlveen is available from the Mariners Trust; price £15.

What are your memories of 1971-72? Or what tall tales did your parents and grandparents tell you? Let us know