We're in the mood for dancing

On Saturday, incensed by the owners' proposition to turn fans into customers, over 10,000 Liverpool supporters walked out of Anfield at the 77th minute of their game against Sunderland. Then they missed what happened in thirteen vital minutes. At Bromley, no such fancy pretentions were evident as the Town fans were penned into a scarcely covered open terrace in one corner of the ground. A select group of Town supporters had opted for the seats in the stands and found themselves escorted to seats with their names on them.

A hard, cold rain fell on the assembling fans huddling under the shelter. Who would try most to keep the customer satisfied?

An older man who didn't have a seat with his name on it looked at me and asked: "Are you from Grimsby?" I told him I was from Cleethorpes. He perked up and told me that he had lived in Cleethorpes for 40 years, living on Isaac's Hill, Queen's Parade and Chichester Road. Then his children had grown up and gone to university and now they all lived in south London, so he had moved down to be close to them. Normally, he confided, he had to go and watch Crystal Palace. Such is life.

Town came out in blue and Bromley played as a Derby County lookalike team in white shirts, black shorts and socks. Both the new boys were on show and so we lined up in 4-4-2 with McKeown; Tait, Toto, Gowling, Horwood; Arnold, Nolan, Disley, Monkhouse; Amond and Bogle. Pearson, Pittman, East, Clay and Henderson warmed the bench.

Bromley featured brawn at the back and muscle in midfield but had two diminutive strikers in Emmanuel and Allassani, who is on loan from Palace.

The pitch was wet on top after the heavy rain brought by Storm Imogen. It was a night for the committed. 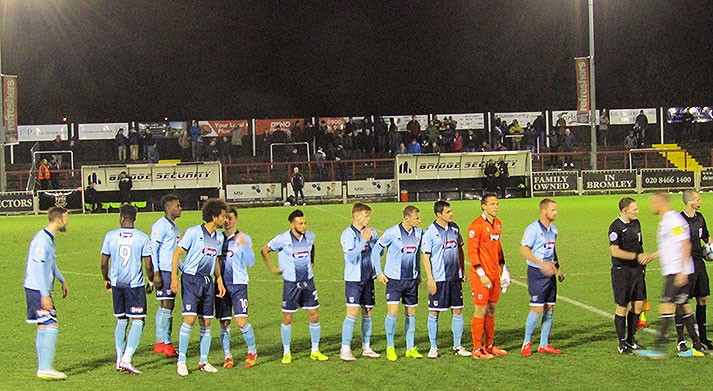 From the kick-off it was Bromley who whipped up a storm in these difficult conditions. They were big at the back and strong in midfield and their idea was to feed the ball through to their two frontmen, who showed they were quick and sharp. Allassani was particularly keen to get behind Toto and Town's tendency to hump the ball out simply meant that it came back off the heads of Bromley's big defenders.

So after six minutes it wasn't particularly surprising that Bromley took the lead. Nolan shoved Bromley's Minshull on our left touchline halfway inside our half. Minshull accepted the opportunity to fall flat on the floor. Shall we say that Nolan is about half the size of Minshull, and he did little more than put a hand on him, so you could tell that they were keen to accept the gift that was offered.

The free kick came in and was headed away by Gowling, but only to a Bromley player waiting in the middle. He gave it back to whoever took the free kick and it came to Emmanuel on the edge of the box, who floated it over to the far post, where Francis got up over Gowling and nodded the ball down into the opposite corner of the net.

We've seen that routine before this season, haven't we?

The first 20 minutes continued in the same vein with Bromley being big and strong and feeding the ball through on the wet turf and Tait and Horwood had to race back to cover the runners. When Town got the ball the big Bromley defenders policed Podge and Bogle tightly and too many of Town's attempts ended up with punts from the back being cleared away by the big Bromley defenders.

By now the middle of the park was a muscular place with no quarter being given by either side and at some point one of the Bromley players ended up with a cut head and had to go off to be bandaged up.

Gradually Town came more into things with Arnold taking the ball along the right touchline and Nolan orchestrating neat triangles of passing with Monkhouse and Horwood in front of the Main Stand. Even some of the Bromley supporters recognised this was a game called football and that one side could play it. The triangles ended up either with Monkhouse haring off down the left like a giraffe on adrenaline before crossing into the box, Nolan driving into the edge of the penalty box, or Horwood playing in decent crosses from his left foot.

Nothing particularly testing came from any of these apart from a decent half volley from Bogle, but it showed intent and there was a growing sense of confidence that only one side was going to score next.

"If we can hang on," voiced the Bromley supporter behind me, "this would be a big scalp for us." Nobody had the heart to tell him that the game was only 30 minutes old and "hanging on" wasn't going to be the likely outcome. And it stopped raining so the Town fans were able to come down to the front of the terrace behind the goal.

Really, it was no surprise when Town equalised. It had been coming for several minutes. Once again Arnold got away on the right and engaged overdrive to leave defenders in his wake. He cut the ball back low across the box, where it took a deflection straight into the path of the oncoming Nolan, who rifled the ball into the far corner of the net from the edge of the box. 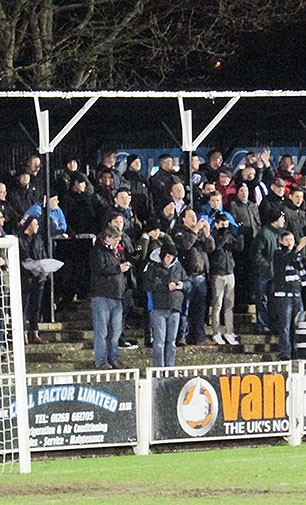 The balance of the rest of the half went with Town. Bromley persisted with their attempts to feed through balls to Allessani getting behind Toto, but by now Tait and Horwood had got this approach sussed and snuffed out his attempts. At the other end Amond and Arnold got on the end of a couple of speculative balls into the box, one of which brought a good save and as the half ended Monkhouse got in a shot which hit the post and came out. The follow-up was judged offside.

Half time came with honours even, but with Town in the ascendency and Bromley running out of ideas. Hanging on was no longer an option for them but there was no plan B on show.

Town made no changes for the second half, but for Bromley, May replaced Cunnington who had suffered a cut head.

Bromley started the second half in the same way as they had begun in the first. They were direct and Town were again hesitant at the back. But nothing particularly dangerous happened. Town's defenders knew what to expect and there was no serious threat to McKeown's goal. At the other end we didn't seem able to get through their defence and Bogle in particular wasn't making any impact.

It seemed that both managers had decided that they needed a new approach to break the deadlock. After 60 minutes Hurst brought Pittman on to replace Bogle, presumably intending to replace power with pace. Five minutes later Bromley replaced the very quick Allessani with Alex Wall, formerly of Luton. Their approach was to go for power and muscle up front as well as at the back, and Wall obliged by introducing a much more physically intimidating presence for Gowling to deal with.

In the 77th minute nobody left the ground. Were they absorbed in the match or were they afraid of what might happen next?

After these changes the game became stretched, and after 76 minutes Disley caught a Bromley player in the centre circle. It reflected the competitive nature of the midfield contest and Disley got a yellow card.

In the 77th minute nobody left the ground. Were they absorbed in the match or were they afraid of what might happen next? As a result none of the fans missed a thing and one set of customers got what they wanted.

In the 78th minute Disley did something that looked very similar and in exactly the same place as he had two minutes earlier. The referee blew for a foul. It was hearts-in-the-mouth time for the Town fans and the Bromley supporters fully expected a second yellow and then a red card, but none came. A sense of relief went round the Town end. It would have been a long final 15 minutes with only ten men.

As the second half drew towards a close Monkhouse got away in another adrenaline-powered, giraffe-like run down the left, only to be brought down by Emmanuel, who was booked by referee Lugg. It was a typical example of what happens when a forward player has to make a defensive tackle.

Arnold stood over the free kick around ten yards outside the box on the Town left and flighted the ball perfectly to Pittman, who glanced the ball into the right corner of the net. It was a great time to score. 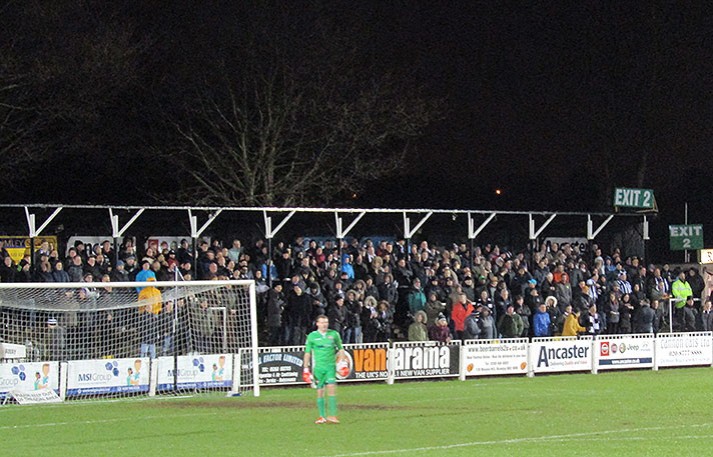 Bromley threw everything into attack for the final period and won a series of corners. For Town it was squeaky bum time and Hurst brought Arnold off for Shaun Pearson in order to bolster the defence. Even so, as added time loomed, McKeown was called to save the day with a fine save from May. Town focused on seeing out time, with McKeown booked for changing a goal kick from the left of the goal to the right, but Bromley decided to help them out by making a substitution in added time.

After four minutes of added time the referee's whistle was met by resounding applause by the Town end. Even the Bromley supporters were able to say that, despite the result, it had been a great game. On the way to the overflow car park we were met by a flood of the 393 joyful Mariners fans who had been on the open terrace and were in party mood.

In the end it was Town who knew how to keep the customer satisfied by playing football and keeping going right to the end. It was a game worth watching from an open terrace on a wet night in February. For us, it was a real team performance, with lots of spirit shown from the point when we went a goal down. For them, their new manager must take heart from the effort and energy shown by his players and the ability of his new front player.

Surely Cheltenham and FGR will slip up somewhere in the run-in?