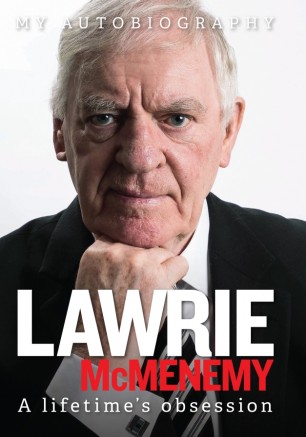 Like the first kiss or your first record, you always remember your first match. Mine was against West Ham in the League Cup in the 1965-66 season. (My first kiss was Chris Clark and my first record was Benny Hill's 'Ernie The Fastest Milkman In The West': my taste has improved since then.)

The time I started going to matches on my own, however, was the 1970-71 season. Our player-manager was Bobby Kennedy and in his first two seasons we finished 23rd and 16th in the fourth division. His third and final season was pretty wretched, too, Town eventually finishing 19th. I remember my friends and I cheering for Brentford during one particularly bad 1-5 hammering, stood on an eerily sparse Imperial Avenue corner, the clouds heavy with portentous drizzle (a not dissimilar feeling to the 2009-10 season, in fact).

When Lawrie McMenemy arrived from a newly relegated Doncaster Rovers, we'd scarcely heard of him. No-one knew what to expect. He'd arrived with 12 players left on the books and was allowed to sign two more – so long as they were free transfers (Owen Simpson and Jimmy Thomson came in).

"At my first team talk with the 12 who reported back for training I knew some would be cynics and I would have to make an impression," writes McMenemy in A Lifetime's Obsession. "I took a deep breath and entered the dressing room. I thought a sea mist had swept in. It wasn't unusual on the coast but in this case I looked toward the corner of the dressing room and saw one of my new players smoking a pipe. It turned out the player was Matt Tees. He was a Scot, a scrawny, skinny sort, a pipe-smoker who looked like a puff of wind would blow him over."

Matt Tees was – and still is – my Grimsby Town hero. He returned to us during Kennedy's final season, after spells at Charlton Athletic and Luton. Part of his appeal for me was that he didn't look like a footballer. He looked like a docker. In 1971 Grimsby, dockers still looked like teds. And everyone else in Grimsby looked like dockers. It was as though mods, hippies, suedeheads and the whole of the 1960s had never happened in Grimsby and we were still in thrall to Gene Vincent, Eddie Cochran and National Service. My dad wore the same cut: a Brylcreemed quiff and a DA. It was the Grimsby uniform and it was shared by Tees.

The pre-season was a sign of things to come (in stark contrast to many subsequent pre-seasons). Immediately before the start of the season, on 10 August 1971, we played the Japanese national team, who'd been touring the country (they played Hull and Southampton before us). We thrashed them 7-2. We were too good to be true (or, at the very least, too good to go down).

"We were under-strength in every department and I'd have to look for goals from my pipe-smoker," continues McMenemy. "He was useless in training. He couldn't hit a shot at goal and when he did it bobbled away. He would puff on his pipe that he would leave inside his jacket. On one occasion it went on fire hanging from a peg in the dressing room." Tees scored a hat-trick in the opening game of the season against Scunthorpe and wound up with 29 goals, while the Town scored 100 in all competitions. We scored four in each of the first three games. We couldn't stop scoring.

There are other, more personal, reasons for my attachment to that season. For most of the season, I stood by the fences behind the right-hand dugout in the Main Stand, where the Town management team of trainer Jim Clunie, physio John Fraser, McMenemy and the Town sub sat, their bench perched precariously in front of the somewhat pointless hut behind them. There was also someone else sat at the end of the bench: Chris McMenemy, Lawrie's son, who was around my age. We struck up a minor friendship and, on one or two occasions, since I struggled to see over the fences, I even got to sit on the Town bench, my 11-year-old tactical nous adding exactly zero to the bench's vast experience.

I got a lift in Lawrie's Jag once. I'd have been less nervous if God had offered me a pag. I don't remember doing much talking

I even got a lift in Lawrie's Jag once. Andrew Milne, who was the Grimsby club doctor for many years, was a friend of my family (his wife and my mum trained as nurses together). In the 1972 close season, I'd gone to a pre-season friendly at Brigg in Andrew's car. For some reason, he had to stay behind, so he asked Lawrie if he could give me a lift back home. I'd have been less nervous if God had turned up on a tandem and offered me a pag. I was this close to a genuine god: Lawrie McMenemy. I don't remember doing much talking.

During Lawrie's tenure we were on TV three times and I'd love to see those games again. They are hopefully languishing in a vault somewhere, like the Elgin Marbles, except more valuable, waiting to be rescued by Harrison Ford or Superman or John Tondeur.

We were featured twice on Anglia's Match Of The Week, a 3-0 drubbing away to Northampton and a home game with Peterborough, in which I think we came back from being 1-2 down to win 3-2 in a Blundell Park mudbath. The following season, we were even featured on BBC's Match Of The Day, when we played Bournemouth away, both sides with hotly tipped managers in Lawrie and John Bond, the game ending in a 1-1 draw. (In the home game earlier that season, I'd asked the Cherries' experienced right-winger for his autograph: "Piss off, son, I've got a coach to catch," replied Harry Redknapp, miserably. Hated him ever since.)

After finishing a respectable ninth in our first season back in Division Three, it was no surprise when Southampton came knocking for McMenemy. He took keeper Ian Turner, Lew Chatterley and Jim Clunie with him and so began our gradual and inevitable descent back to Division Four. Grimsby and gravity have always been inextricably linked.

A Lifetime's Obsession is a curious book. The obsession is clearly not factual accuracy. In the one, highly enthusiastic, chapter on the Mariners, there are a clutch of errors. We hadn't just been relegated when Lawrie arrived; the crowd for our opening match with Scunthorpe was 7,497 not 4,500; we beat Exeter 3-0 not 4-0 at the end of the season, while Lew Chatterley and Ian Turner signed in February 1972, not the close season. I can't vouch for the accuracy of the rest of the book, since my knowledge of Southampton is confined to our 0-0 FA Cup draw at the Dell in 1978, my one and only visit there. As for Sunderland, for McMenemy aficionados like me, it's an itch probably best left alone.

At particularly maudlin points even now – and let's face it, there have been many – I often daydream back to 1971-72, perhaps imagining I'm at the top of the Pontoon in the League Cup tie against Norwich, along with 22,000 other fans (even my mum came to that one); or invading the pitch after the Peterborough match and spotting myself on Match Of The Week, my ridiculous scarf-on-both-wrists combo making me look like a net curtain with legs. I can still see Stuart Brace's eccentric gait as he trotted down the right wing, every third step his right boot tip trailing along the surface; tiny Dave Boylen's little flicks and moves making us tick in midfield or Mike Hickman, who ran like he'd been made out of spare parts from several bodies, his ungainly yet effective runs like a doe taking its first steps.

Whenever I get a whiff of cigar smoke or pipe tobacco, I'm back in the Barrett stand, surrounded by deep and lasting flurries of industrial language and the sound of the madman who used to stand near the touchline shouting: "You're bloody rubbish number three!" every week, irrespective of the player. Twenty-two thousand in Blundell Park? Can you imagine it? I was there. It was real. A bit squashed, mind you, but very very real.

Lawrie McMenemy: A Lifetime's Obsession - My Autobiography is published by Trinity Mirror Sport for £18.99 (hardback); £6.99 (Kindle)