Fortress Blundell Park! Managers and fans alike refer to it but is there anything in it?

A recent Cod Almighty diary posed the question as to whether home advantage is diminishing as football crowds have moved from the passionate terraces of the past to the sterile identikit stadia of today.

I’m a psychologist and occasionally work as a sport psychologist, so I couldn’t let this lie without some further investigation. I turned to Google and sure enough there has been plenty of examination of such things.

Data presented by Sky Sports last year crunched every League result in England since 1888 and noted a steady decline in home advantage. They noted that at its peak in 1895-96, 64.5 per cent of matches were won by the home team but by 2015-16, this had plummeted to just 41.0 per cent. 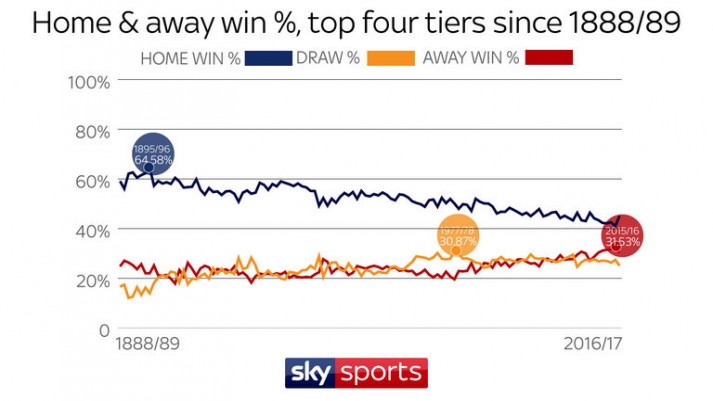 So, in response to the original question, yes, home advantage has significantly diminished over time, but it seems unfair to place the blame on the soulless concrete jungles of today. That’s not to say the stadium doesn’t reduce home advantage, just that this data is unable to determine that such a hypothesis is true. What we can be confident in asserting, is that a reduction in home advantage is mitigated by crowd size. From a psychological perspective, we know that the fewer people watching us, the more we subconsciously reduce our effort and persistence.

This is fine, but what got me interested was the following question I posed to myself: I wonder what Town’s home advantage trend has been over the years?

Well I had a lengthy train journey ahead of me with free Wi-Fi so I pushed aside the kind of work I should be doing and got stuck into some historical league table data. Here's what I found.

Following Sky Sports' lead, I began with win percentages, both home and away.

While the percentage of away wins has gradually increased, our win percentage at home has decreased at twice the rate (for any nerds or academics, r = -.42, p < .01). Similar to the national trend, we averaged home win percentages around (and sometimes much above) 70 per cent at the turn of the 20th century but are lucky to see the lads celebrating upon the final whistle at Blundell Park 40-50 per cent of the time these days. 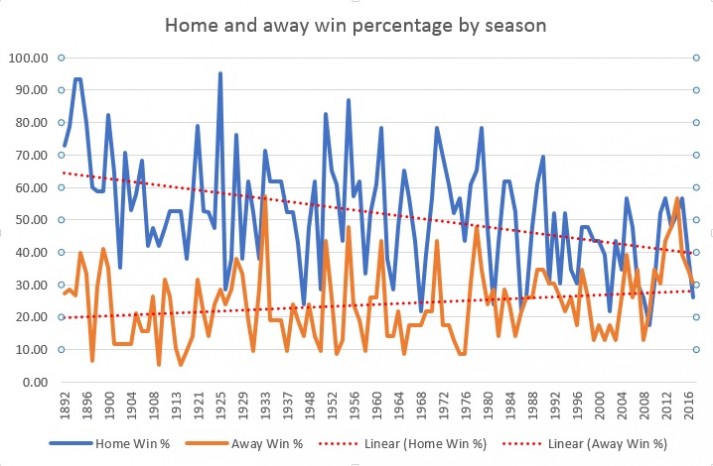 The proportion of wins from home games

The downward slope is even larger when expressed as the proportion of wins in a season that came from home matches. Most startling is that from Town’s first foray into the league in 1892 and the end of the 2006-07 season, on only one occasion had we won more games away than at home (1981-82) and that was due to winning only five out of 21 home matches!

Since 2006-07, Blundell Park has been more like an unattended park bench than a fortress. In the last 11 seasons, Town have won more away matches than home matches on five occasions. 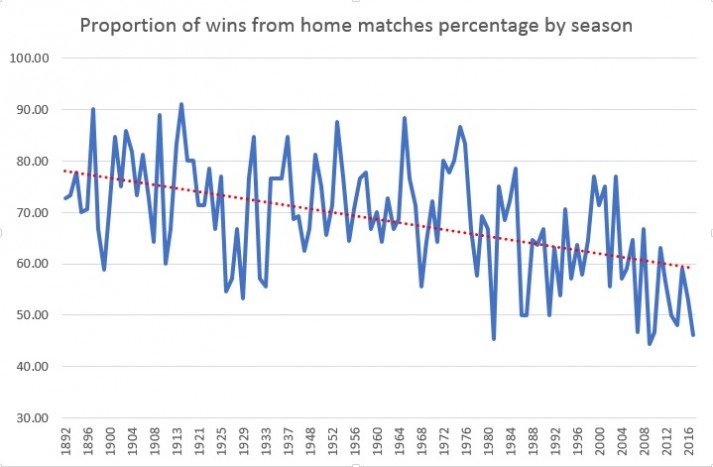 As expected then, both home and away goal differences have similarly converged over time. Only once have Town ever had a better goal difference away from home than at Blundell Park and this was in 2014-15, the season which ended in Wembley heartache. 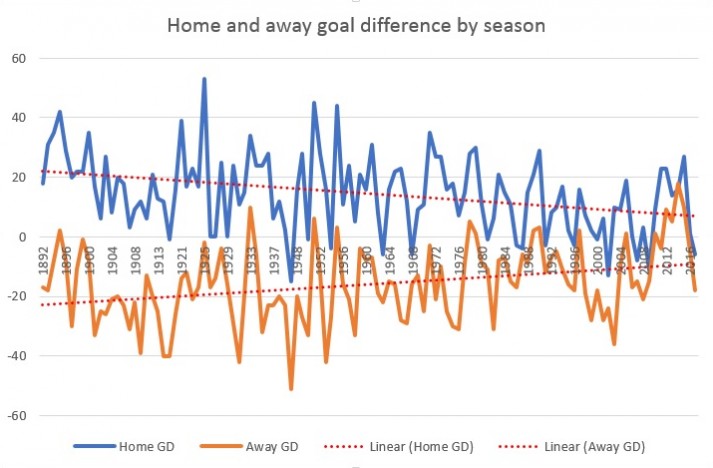 Proportion of goals scored at BP

If you’re an optimist (A what? Ed.), you might reflect on the value for money away fans are getting. The next graph highlights the decline in the proportion of Town’s goals that are scored at home. Ever since I remember, there has been a feeling that we are better shooting towards the Pontoon but unfortunately, I cannot obtain the necessary data to examine this. 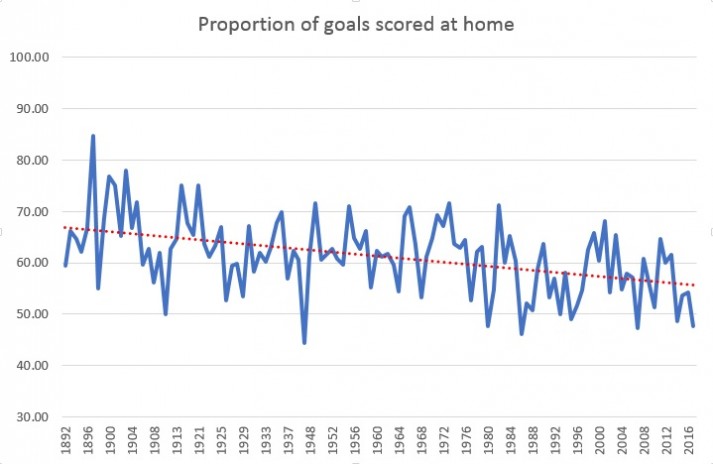 I’ve not forgotten the value of a good draw and so let us look at to games unbeaten. This is surely the true measure of a fortress but unfortunately this too has seen a significant decline.

The Mariners have been unbeaten at home for an entire season on five occasions, though the last of these was in 1925-26. On two occasions, the Blundell Park faithful have seen more than half of the matches ending in defeat; the 1947-48 season, which saw Town relegated from the top tier, and 2002-03, when our slide from football’s second tier began. (the Fenty era. Ed.) 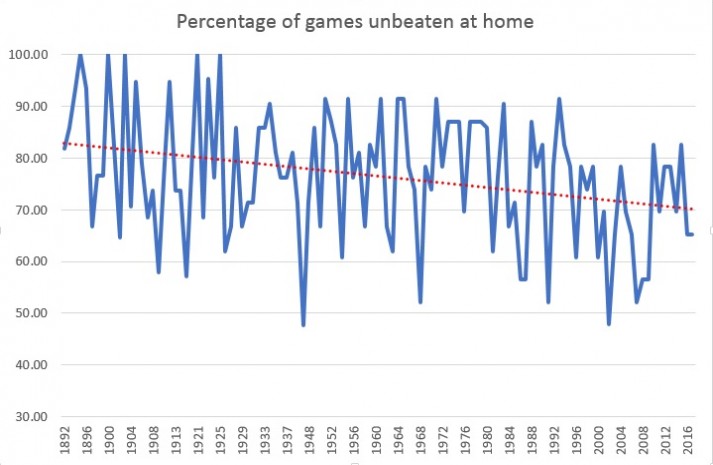 The end of home advantage?

Perhaps the most useful measure of home advantage is the proportion of overall points that are accumulated at home. This was a little tricky as the data had to be adjusted to account for the shift from two to three points for a win post-1981.

The slope here is the steepest of all the graphs and the trend now sits below 60 per cent. If this continues, this will reach 50 per cent (elimination of home advantage) in the next couple of decades. The proportion of points accumulated over a season coming from home matches has dipped below 50 per cent on four occasions: 1991-92 when Town just managed to secure survival in in our first season in division two after two successive promotions; and three recent seasons: 2007-08, 2009-10 and 2014-15. 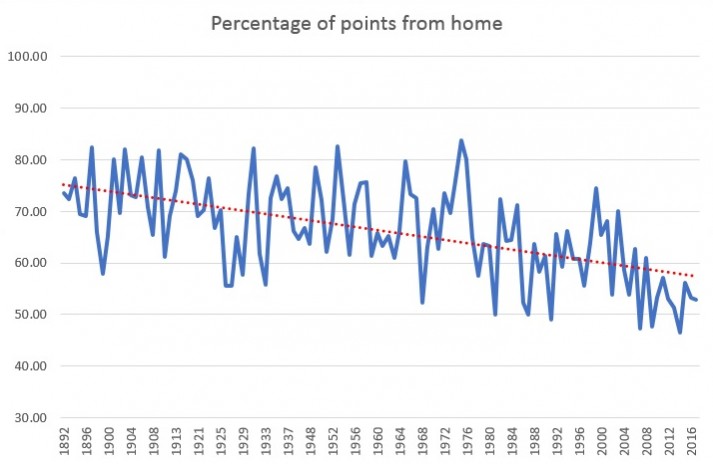 In conclusion, is Blundell Park a fortress?

No, not really, but it used to be.

I am old enough to remember walking out onto Imperial Avenue with “The Only Way Is Up” by Yazz blaring out and feeling like Town were a real force at home, but I can only imagine what it must have been like in the early 20th century. (much the same, minus the Yazz.  Ed.)

I’ll not speculate here as to reasons for the diminishing home advantage, both at Town and in football generally, but perhaps ponder this on my next long journey on public transport.

Why the decline in home advantage? What do you think? It can't be down to ITV Digital, can it? Let us know what you think.

The Sky Sports graph is, of course, not ours. We'll take it down pronto if either Sky Sports or Adam Smith aren't happy with us including it.